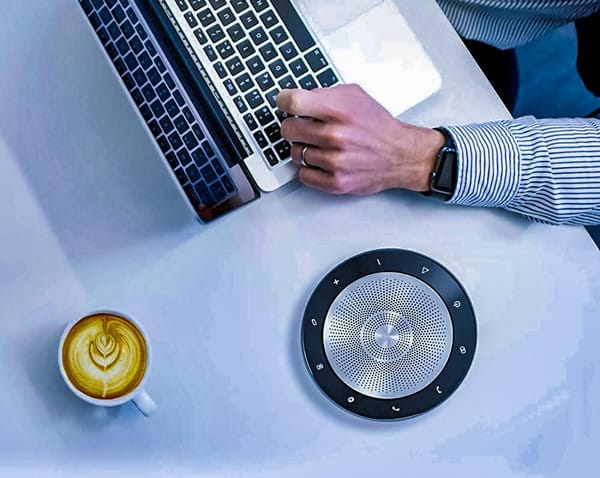 What are the best 360° Bluetooth wireless speakerphones for conferences below $200?

Whether you hold phone conferences, need better audio for video conferences, or prefer a more convenient way of talking to people for work; having a wireless speakerphone is essential.

There are any speakerphones on the market pickup audio, a 360-degree radius with its omnidirectional microphone. Having that ability is very convenient and professional in a conference environment.

Luckily, many 360 wireless speakerphones are relatively affordable while maintaining professional dependability. After extensive research, testing, and the help of a few friends who use speakerphones for business conferences; We formulated a list of the six best omnidirectional conference speakerphones below $200.

In Short, Here Are The Top 6 Affordable 360° Wireless Speakerphones For Conference, Working From Home, Travel, Etc

First up, the eMeet M1 is an outstanding speakerphone under $200. Not only is it entirely wireless, but it’s omnidirectional. This means it picks up sound at a 360-degree radius. The overwhelming majority of people that use and love this speakerphone are businessmen and women. It works great for conferences of up to 5 people. However, it’s great for people who work from home, as well.

Since it’s compatible with all office devices, you can connect it to Skype, Cisco, FaceTime, Google Hangout, etc. Its built-in 2600mAh rechargeable battery provides roughly 12-hour battery life. You can get it in either black or white. Overall, it’s one of the best affordable conference speakerphones on the market!

Running well below $200, the Kaysuda is a decent conference speakerphone. It’s compatible with Mac OS, Chrome OS, all Windows OS, Linux OS, and Android. It’s completely wireless with a Bluetooth connection. However, you can use a USB, as well. This speakerphone works well with FaceTime, Skype, Zoom, WebEx, Google Hangout, Avaya, GoToMeeting, etc.

The overall sound quality of this speakerphone is not the best. Out of the 6 on this list, we believe it produces the worst audio on both ends. However, it’s still one of the best cheap speakerphones on the market. It’s also the cheapest unit on this list. We recommend it if you’re on a very tight budget.

Users Say: “I had a very specific problem – I use my iPhone to record interviews with small groups of people and all too often the built-in mic does not pick up the quietest voices. Since this is a Bluetooth mic, I can place it unobtrusively next to the speakers while the iPhone is across the room to get a full view of their faces. Works really well. Only two complaints: (1) the on/off/connected message is rather loud and (2) sometimes hard to figure out how long to press to get it to on and off. I tried three other mics that didn’t solve my problem – this one works!”

If you’re looking for the very best bang for the buck 360º speakerphone for conference calls, look no further than the eMeet M2. There are a plethora of reasons why we love this speakerphone. For one, they just knocked the price by 10%, bringing it below $200.

It’s near flawlessly rated and reviewed by customers, as well. You’ll also love how it’s very compact, wireless, and able to be used for groups of up to 8 people.

The 4 AI Smart Microphone Array is self-adaptive. Thus, it can pick up voices from far away and produce them clearly on the other end. This speakerphone provides stellar audio that’s clear and crisp for both ends.

With fantastic reviews for professional applications, this unit won’t let you down. It’s very reliable, sounds better than the rest in its price range, and designed to last a very long time.

With a simple plug-in and use set up, it can be connected by Bluetooth on any supported device. You’ll also highly appreciate its portable design. If you travel often, the eMeet M2 perfectly fits in just about any travel bag. It also comes with a convenient travel case. This speakerphone is compatible with Mac OS, Windows 7, Windows 8, and Windows 10. For video conferences, this unit works great with Skype, WebEx, Zoom, Google Hangout, Goto Meeting, FaceTime, etc.

On the top face, you’ll buttons for power, volume, phone, microphone, and mute. With its ability to reduce unwanted background noise, it ensures clear audio. Overall, the eMeet M2 is our favorite 360 wireless speakerphone for conferences under $200. We highly recommend it!

Users Say: “I am an engineer that works for a big IT company, I have to be most of the time talking on my phone or being all day in front of my laptop with my headset (I do home office a lot of time) but after 2 or 3 meetings being stuck in your laptop is really annoying. This Speakerphone solved the problem, now I can be in conferences, online courses and I can move around my house listening really clear. Also whenever I have to do a meeting and the only available rooms in the office don’t have conference phones, I take out the emeet and we solve the issue (also is really fancy in front of everyone haha). No regrets on my purchase.”

Next up, the Jabra Speak 510 is another remarkable wireless speakerphone under $200. Like the last one, this is another one of our highest recommendations. It has an exceptional Omni-directional microphone that picks up your voice anywhere around it. It’s most effective for groups between 1-4 people.

With a 15-hour battery life, it’s very convenient and dependable. It only takes 2 hours to reach a full charge. You’ll appreciate its travel-friendly portable design, as well.

With excellent user reviews across the board, this speakerphone is created for professional applications. Whether you work from home, travel, or hold conference calls; this unit is a reliable choice that won’t let you down.

It provides pristine sound quality, which accentuates the voice clearly. Overall, the Jabra Speak 510 is another one of the best speakerphone choices on this list. Be sure to check out the reviews below!

Users Say: “I work from home. Because of this, I have a lot of conference calls. I tested this with my colleague the other day and was comfortably able to pace at around 8 feet away and still be heard fine on the other end. The touch screen buttons for volume, mute, end call, etc all work flawlessly with my windows computer using Skype for Business (formerly Lync). The lights that surround it to show if you are muted and battery levels, as well as volume, is also a wonderful feature. Over time this thing will more than be worth the investment. I haven’t tried Bluetooth connections as I don’t have much use but don’t know why it wouldn’t be a nice additional feature. Very happy.”

The eMACROS is another cheap conference speakerphone below $200. It’s wireless and able to capture audio at a 360-degree radius. With a miniature design, it’s easily able to travel with. Some people put it in their bag, purse, briefcase, and in some cases, their large pocket. You’ll also enjoy its extended battery life. On a full charge, the 1800mAh battery gives you 15 hours of playtime.

Best used for conferences anywhere between 1-8 people, this speakerphone has a long-ranged microphone. The overall sound quality is pretty good on both ends. Not the best on this list, but definitely not bad either. It has a robust build quality that’s able to last a long time.

The primary downside of this unit is the few claims of people receiving it defective. Aside from that, the eMACROS is a pretty good omnidirectional speakerphone with wireless capabilities. It’s very affordable under $200, sounds pretty good, and able to capture the voice of 9 people. Although it’s not the best speakerphone on this, it’s still a good choice for the money.

Users Say: “I’m very satisfied with this speakerphone. It performs better than I expected. With rich sound for its size and a well thought out design, it is a pleasure to use. I bought it to use as a speakerphone but now use it for music as well. The setup was effortless and the directions covered pretty much all my questions. It seamlessly switches to an incoming call while listening to music and back to music when the call is ended. It also comes with a handy travel bag. This is much better than my cell phone speakerphone. Well designed.”

Last but not least, the Yamaha UC YVC-200 is a great speakerphone for conferences. Running below $200, it’s inexpensive and a great value. You can get it in either black or white. Not only does it have excellent build quality, but it has a stylish design, as well. The 360-degree Omni-directional microphone picks up audio all around the room. In terms of its sound quality, it’s crystal clear on both ends.

With a battery life of 10 hours, the wireless charger will easily last you a full workday. The top face provides many essential features such as a mute button, call button, volume knobs, a speaker mute button, and NFC pairing.

This is an excellent speakerphone if you work from home, often travel, have video conferences, or have standard work conferences. You’ll also appreciate the carry case that comes with the purchase.

It provides you with three different connection options; Bluetooth, NFC, or USB. The included USB cable that comes with the purchase is 3.3 feet. Overall, the Yamaha UC YVC-200 is a great choice if you require an affordable omnidirectional speakerphone with wireless capabilities. Be sure to check out the reviews below!

Users Say: “This is a fantastic USB/Bluetooth/3.5mm speakerphone. The pickup is fantastic and the output is solid. Don’t expect it to blow your socks off as a Bluetooth speaker, but the voice sounds clear and natural (which of course is what this was designed for). I haven’t thoroughly tested Bluetooth range, pickup range, or battery life yet, but the ease of use, sound quality, build quality, and aesthetics all get an A+.”

Keep in mind that our opinion is not the end all be all. Like mentioned earlier, everyone has different needs, requirements, and budgets for their earbuds. However, our winner is the eMeet M2 for many reasons. It has the best sound quality on both ends, able to pick up the voices of up to 8 people, compact, travel-friendly, has great build quality, and very reliable for professional situations. We believe it’s the overall best bang for the buck conference speakerphone and we highly recommend it!

Here Are The 6 Affordable Speakerphones Under $200 (Omni-Directional)

Looking for an affordable projector under $200? See our top choices here.

In case you’re looking for an outdoor rug, see our top choices here.

19 Best Outdoor Rugs For Your Home

If you’re interested in a pair of wireless earbuds, see our top 9 here.