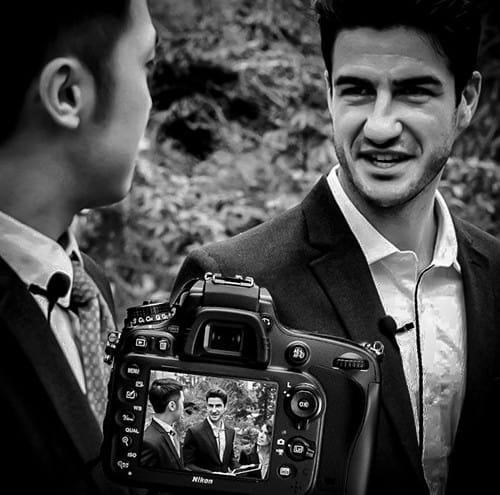 What are the best dual lavalier lapel microphones with a 3.5mm jack?

First off, a bit of a backstory. The video and media market has absolutely exploded within the past 5-10 years. Nearly every business, musical artist, brand, and personality use videos in one form or another to market themselves or a product. You can have thousands of dollars of video gear and lights for flawless visual video, but your video is a waste without good audio.

While getting good audio for your videos substantially increases the production value, there is good news! Boosting the audio to your video is not that expensive at all in comparison to video equipment. That’s where lavalier microphones come in.

So why do people want a lavalier microphone with a 3.5mm jack?

Rather than purchasing a full lavalier system with both a receiver and transmitter for wireless abilities, many people would rather plug the lavalier directly into their 3.5mm camera or phone jack. It’s a much easier and cheaper solution to supply great audio to your videos. On top of that, a dual lavalier microphone would provide great audio for two separate people at the same time. Many people use dual lavalier microphones for interviews, podcasts, or any type of video where two subjects need a mic.

Generally, 3.5 mm dual lavalier microphones are perfect for many smartphones. Most cameras have a 3.5mm jack, as well. In the case where your phone does not have a 3.5mm jack, adapters are available to eradicate the issue. Now keep in mind, you will not be able to walk around freely with wireless abilities unless you have a full system lavalier mic with a receiver and transmitter. If you have a couple of extra bucks to spend and want a full dual lavalier system, see our top 7 systems here.

After extensive research, personal experience, testing, and help with some of our friends in the video audio world; We narrowed down our list to the 7 best dual lavalier microphones with a 3.5mm jack.

First up, the PoP voice Premium is a popular and highly-rated dual lavalier microphone with a 3.5 mm jack. In total, you will only be receiving one unit rather than multiple attachable cords. I personally think a one unit dual microphone is much more convenient than receiving multiple cords to attach.

Both clip-on microphones have an omnidirectional polar pattern meaning it picks up the audio on every end. After the cable splits off from the 3.5 mm jack, each cable is 16 feet long. This gives you adequate space for filming various applications with ease. With its condenser microphone, the PoP voice Premium provides a crisp and articulate sound quality you wouldn’t expect from its low price.

The build quality is relatively durable, as well. I have had no technical, audio, or mechanical issues while testing it out.

It seems well designed and built to last a good while. Overall, I highly recommend this dual lavalier mic. It’s a solid choice and shouldn’t disappoint you. Something to keep in mind about this unit, make sure to disconnect the microphone before playing the audio back!

The dual lapel mic PowerDeWise is a good buy. Between the two clip-on lavalier microphones, 2 extension cords, 2 windscreens, 1 connector, and 1 mono adapter for PC; All of the units are separated out. While Some people prefer one cable all tied together, others prefer a set that is separated.

They both have their benefits and downsides, but it primarily comes down to personal preference. For those who are consistently switching distance and amount of people who need a microphone, a separated dual-mic may be a better choice.

In terms of sound quality, it is very good. Just make sure your gain isn’t clipping! In my experience, this mic is best placed around the nipple line for optimal quality. Most of us making videos or shooting interviews prefer not to mess around with setting audio gear up. What I like about the PowerDeWise is the easy plug-and-play. The wires and mic have a good build and weight to them, as well.

Next up, the Comica CVM-D03 is yet another great dual lavalier lapel microphone with a 3.5 mm jack. Separated out, this mic comes with two separate clip-on lavalier microphones, a connector, and a 3.5mm jack. However, this unit is much more conveniently and neatly separated compared to others. The audio jacks in the sturdy connector play a significant factor in that, as well.

In total, the CVM-D03 cable length is nearly 20 feet long, giving you enough room for most applications. Something I find very beneficial is its ability to either record in mono or stereo. The sensitivity and volume adjustment located on the connector is beneficial, as well.

However, it is unfortunate that the volume and sensitivity controls are for both microphones at the same time. It is not separated. Not to forget, the sound quality is excellent and robust. The mic does a great job of rejecting background noise and wind. I highly recommend this dual lavalier lapel mic.

Here’s another excellent choice, the MAONO AU200 dual lavalier lapel mic is very affordable. Currently running below $30 on Amazon, this mic has a 3.5 mm jack. It’s compatible with android, tablet, DSLR cameras, computers, and most smartphones. Both the mic and cables are very lightweight. It is a single unit; therefore, no need to attach any cords.

The MAONO AU200 produces very good sound quality. It has a slight boost in the upper “airy” frequencies, which enhances vocal articulation and clarity. However, there is a minor catch. This microphone does pick up a bit more background noise than the average lavalier. If you primarily need a dual microphone in a relatively quiet environment, the MAONO AU200 is an excellent choice. If I had to critique it, the build quality is not the best. Be sure to take care of it, and it should be fine.

The YelloWay dual lavalier microphone is one of the highest-rated on the market, and rightfully so! It comes with a compact and convenient travel case, two clip-on lavalier lapel microphones, a connector with a 3.5mm jack, 2 windscreens, an extension cable, and a 4-pin to 3-pin adapter. It is compatible with the following; iPhone 7, 8 plus, X, DSLR, or Android. Keep in mind; you must use an adapter for the iPhone X series.

Here is another microphone that caught me off guard after listening to the audio. Once again, for the low price, the sound quality is superb. It is very natural sounding and, to my ears, doesn’t need too much post EQ. The build quality feels much more expensive than a $25 set.

After using this dual mic for a few weeks, I can tell it doesn’t need replacing anytime soon. I highly recommend the YelloWay dual lavalier microphone for anyone who wants to connect it to a smartphone or camera. One downside is you must apply to get the extension cord. While you do get the extension cable for free after applying, it’s just a slight inconvenience.

Yet another very high-rated dual lavalier lapel microphone is the Movo. Coming in a travel bag, you get 2 lavalier microphones, 4 clips, 4 windscreens, and a connector. This purchase comes with a 1-year warranty from Movo.

It’s compatible with Samsung Touch smartphones and tablets, IOS iPhone, Apple iPod, and Apple iPad. This dual-mic works best with smartphones. DSLR users may want to skip this one. With its electret condenser microphone and wide frequency response of 35 Hz to 18 kHz, it produces very good sound quality. The build quality is very good for the low-price as well. I do like the extra windscreens that come with the purchase.

If I had to critique the Movo lavalier, I’m not a big fan of the difference in cable length between both microphones. The primary mic is 8 feet, and the second mic is 5 feet. However, if your planning on shooting your video close to your phone, the cord length shouldn’t be an issue.

Another downside is that both lav microphones can’t work at the same time with a DSLR. Only one microphone can work with a DSLR, but both microphones work great with a phone. Overall, the Movo is an excellent and affordable dual lapel mic for vloggers, interviews, and videos with a phone.

Last but not least, the YouMic dual lavalier clip-on microphone is an overall solid choice to pick. Producing excellent audio for the price, it is an incredible bang for the buck currently below $25. Coming with the purchase is a travel bag, two lavalier microphones with windscreens, 2 extra red windscreens, a dual y-splitter with a 3.5mm jack, and a 4 to 3-pin mono adapter.

Especially for the low price, the sound quality is excellent. To my ears, it’s incredible how this mic is better than many lavaliers double to triple its price. The sound is full and well-balanced. Better yet, it’s an effortless setup that doesn’t require any extra drivers. I also like the low noise-handling capabilities in case you touch it while recording.

The only complaint about this mic that I can think of is the relatively short cord length of 5 feet. However, there are rumors that YouMic will be fixing the issue soon. Overall, this dual lavalier microphone is an excellent choice for anyone who plans on shooting close-up videos.

Our winner of the 7 best dual lavalier lapel microphones with a 3.55mm jack is the PoP voice Premium. There are multiple reasons why we chose this mic above the rest. For one, we nearly simultaneously agreed that it had the best or tied with the best sound quality. Another reason is its convenience and durability. The build quality seems much more robust and built to last longer than the others. We also like how the PoP voice Premium is a single unit rather than keeping up with multiple parts. Lastly, the cable length of 16 feet should give anyone an adequate amount of space for most applications. Before you purchase, make sure it’s compatible with your device. Here is the list below.

A lavalier microphone is basically a mini mic that attaches to the clothing of the speaker.

What are lavalier microphones used for?

Lavalier microphones are primarily used to capture audio for videos.

What are other names lavalier microphones are called?

How much does a lavalier microphone cost?

With a few exceptions, lavalier microphones come in a vast price range as you can get them in where between $13-$200’s. However, they’re more expensive if you purchase them with a receiver and transmitter for wireless capabilities.

Best 3.5mm Lavalier Microphones To Mic 2 People At Once

If you’re interested in a wireless headset, see our top choices here.

In case you’re interested in a gaming chair with flip-up arms, see our top choices here.