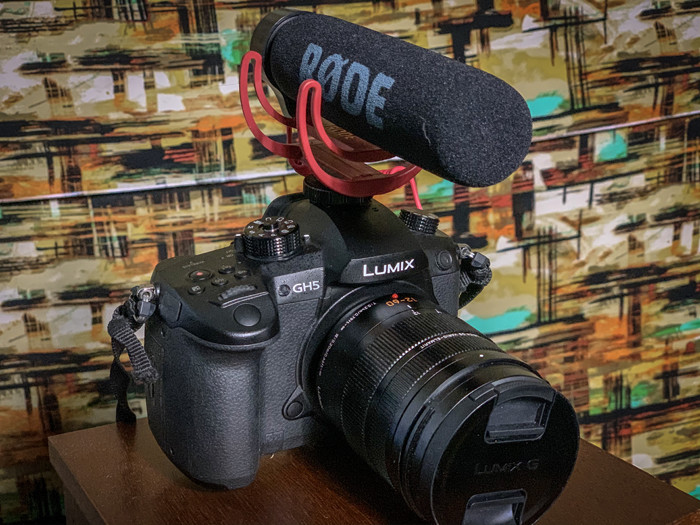 What’s the best 4K camera bundled with a microphone that attaches to the camera?

In the age of rapidly growing media, shooting ultra-high-quality 4K resolution is vital. But there’s only one thing just as important as getting great quality video. If you couldn’t guess, the answer is getting great audio with your video, as well. We scoured the market in search of the very best cameras that come with an attachable microphone. After extensive research and testing; we narrowed it down to our top 8 favorite bundles.

In Short, Here Are The 8 Best 4k Video Cameras Bundled With A Microphone

Running below $800, the Panasonic Lumix G85 4K + Rode is one of the most budget-friendly 4K mirrorless cameras bundled with a microphone on the market. Not only do you get the camera, high-quality rode microphone, and a 12-60mm lens; This bundle also comes with a decent shock mount, a travel case, 2 Koah pro rechargeable batteries, a 128GB SD card, a mini tripod, and a dual charger. We believe this bundle is a flawless value for anyone not willing to break their bank.

You’re able to shoot up to 4K/30fps with this camera. The overall video quality is impressive compared to its price. But that’s not the only thing that outperforms it’s low-but. With its splash and dustproof capabilities, it has a remarkable overall build quality. Overall, the Panasonic Lumix G85 4K + Rode is an affordable but incredible value camera and mic. You’ll be more than satisfied with this bundle for the low price.

Users Say: “Waited a long time for this bundle to be restocked.. I’d say it’s the best bundle for the price…4k camera and a rode mic for vlogging plus a bunch of free stuff from Focus..my package arrived earlier than the said date….I recommend this to anyone else that wants to start vlogging.”

Next up, the Sony Alpha A7 III + Vidpro is an exceptional camera and mic bundle. Coming with the purchase, you also get a travel case, two attachable lights, a tripod, a 64GB SD card, a cleaning kit, and a few other useful accessories. Something I really like is the 28-70mm FE OSS lens coming with the purchase. Although this is one of the more expensive cameras on the market, it’s easily one of the very best cameras on the entire market, as well.

With high-quality autofocus, 693 phase-detection points, 24.2 megapixels BSI full-frame image sensor, 14 bit uncompressed RAW, and its ability to shoot beautiful 4K video; this camera is truly one of the best. Whether your taking videos or pictures, the image quality is remarkably crisp and sharp. Even the mic coming with the purchase does an excellent job, as well. You’ll also love its built-in 5-axis stabilizer for smooth shots. Overall, the Sony Alpha A7 III + Vidpro camera+microphone bundle is one of our highest recommended choices on the market.

Users Say: “All items arrived on time, brand new and in perfect condition. It is a great complete kit. I am just in the stages of learning how to use this camera – it has a lot of new technology compared to the camera I had been using. Thus far, I am quite happy with this purchase!”

Coming with much more than a good quality attachable mic, the Sony Handycam FDR-AX700 + Mic is an impressive camera bundle. You also get a mini tripod, travel case, craning kit, batteries, rapid charger, and more accessories. The camera shoots high-quality 4K resolution, and the Mic picks up clear audio. You’ll also enjoy the sizable amount of space with its 128GB SD card. We believe this bundle is a reliable choice for most applications. Be sure to check out the reviews below!

Users Say: “Pro-level camera at not so pro-level price.”

For a plethora of reasons, the Panasonic LUMIX GH5 + Rode is the camera+mic bundle that I decided to keep. First off, the camera itself is phenomenal. You’ll also love the high-quality Leica DJ 12-60mm lens coming with the purchase. But one of the primary selling points is the high quality Rode mic. Able to capture audio exceptionally well, the microphone is possibly the best on the list. But don’t be fooled by the mic, the GH5 camera is one of the very best mirrorless cameras on the market.

This camera can shoot an astounding 4K resolution up to 60 frames per second. Some of the reasons why the GH5 tends to shoot much more precise color, smoother shots, and crisp UHD video are due to its Venus Engine Processor and phenomenal 20.3 Digital Live MOS sensor. Something I also love about this camera is the overall robust build quality that’s able to withstand vigorous conditions.

Not only do you get an extraordinary camera, lens, and microphone; but you also get a convenient travel case, 64G SD card, strap, two rechargeable batteries, and a dual charger. I’ve had this bundle for about one year now. Between the camera, lens, microphone, and the other accessories; I’ve had no issues at all. Overall, this is a flawless 4k camera bundled with a mic. Be sure to check out the reviews below!

Users Say: “If you’re in the market for Cameras, then I suspect you’ve already done your research on youtube and etc. Great for video recording, and above average for photo taking is the general consensus. Love the value and would recommend it all day long.”

The Panasonic HC X1000 + Polaroid is an excellent 4K camera bundled with a good quality microphone. Not only are you getting a Polaroid microphone, but you also get an SD card, an attachable light, and other miscellaneous accessories that come in handy.

The camera itself can shoot up to 4K at 60fps. This means you can capture slow-motion footage at ultra-high quality. You’re also able to shoot in many different formats such as MP4, AVCHD, and MOV. Another attribute that significantly boosts the image quality is the bit rate of 200 Mbps.

The 4-drive Leica Dicomar lens you receive with the purchase is fantastic. Not only does it offer a 20x zoom, but it also captures a crisp and detailed video. Zoom and iris rings are on the lens, as well. The primary downside I noticed with this camera bundle has nothing to do with the camera itself.

Unfortunately, the backpack coming with the purchase doesn’t seem to be designed for the camera at all. But if you’re randomly in need of a backpack, then you shouldn’t have anything to complain about. Overall, the Panasonic HC X1000 + Polaroid is an excellent 4K camera bundled with a decent microphone.

Users Say: “Loved the bundle! Everything you need is there to start. The backpack could be better, but it does the work. Video quality is amazing outdoors. It could be better while shooting indoors, but can’t complain.”

Next in the lineup, the Canon EOS 90D + DM-E100 is a great bang for the buck 4K camera bundled with an excellent quality microphone. With the purchase, you also get a 32G SD card, rechargeable batteries, charger, strap, carry case, mini tripod, and windscreen for the microphone.

This camera has fantastic picture and video quality. Not only does it shoot up to 4K/30fps, but the high-res 32.5MP APS-C CMOS sensor significantly enhances the image quality. You’ll also appreciate its versatility and ability to shoot in a plethora of environments.

Not only do we believe this camera and mic are a great deal, but it’s also highly rated amongst customers. The microphone bundled with the purchase does an outstanding job of capturing audio, as well. Overall, the Canon EOS 90D + DM-E100 is an excellent 4K camera bundled with a mic. It has high reviews, shoots great video, and has an excellent mic for audio. Be sure to check out the reviews below!

Users Say: “This is an exceptional camera to step up to from a point and shoot or basic crop-sensor camera (the Canon EOS t4i in my case). Highly customizable yet retains good fully-automatic operation. Great resolution, superb autofocus, and fast burst speed make it ideal for up-and-coming wildlife photography enthusiasts. Works perfectly with all Canon EF and EF-S lenses, so you can get the best from economical lenses or take advantage of the high-end lenses from Canon or others.”

Here is yet another fantastic 4K mirrorless camera bundled with an attachable microphone. Like the last one, the Fujifilm X-T3 + Rode also comes with a high-quality Rode microphone. You also get a 32G SD card, a robust hard case, two rechargeable batteries, a dual charger, an attachable light, and other accessories that might come in handy.

One of its reliable attributes is the camera’s massive phase-detection AF area. With its X-Processor Pro 4 Engine and its 26.1MP APS-C X-Trans CMOS 4 image sensor, this camera captures detailed, rich, and crisp videos and pictures. It’s able to shoot up to 4K/60fps, as well. Overall, we highly recommend the Fujifilm X-T3 + Rode for anyone searching for a 4K camera+microphone bundle without the lens.

Last but not least, the Blackmagic Design Pocket is an outstanding 4K camera bundled with an Audio-Technica ATR6550 microphone. The condenser coming with the purchase is another high-quality shotgun mic. It picks up audio cleanly and well balanced. With the camera’s ability to shoot 4K resolution at 60 frames per second, you can capture video at UHD definition and slow it down smoothly.

Coming with the purchase, you get the camera, condenser microphone, a light, a rechargeable battery, charger, 64SD card, strap, carry bag, and a few other useful accessories. Like the previous bundle, this one doesn’t come with a lens giving you leeway to pick your own separately.

One of the unique benefits of this camera is its excellent low light performance. The ISO goes up to an impressive 25,600. Another thing you’ll appreciate is the huge 5-inch touchscreen on the back. It’s bright and helps you focus your images more efficiently. With 13 stops of dynamic range, it’s fantastic at capturing true depth.

Overall, the Blackmagic Design Pocket + Audio-Technica ATR6550 is a great choice if you want a high-quality camera bundled with a great condenser microphone without the lens. It’s an excellent value for the price, and we highly recommend it for most applications. Be sure to check out the reviews below!

Keep in mind that our opinion is not the end all be all. Like mentioned earlier, everyone has different needs, requirements, and budgets for their camera bundle. However, our winner is the Panasonic LUMIX GH5 + Rode. We believe it’s the overall best bang for the buck. Not only is the camera absolutely phenomenal, but the added accessories and microphone are outstanding, as well.