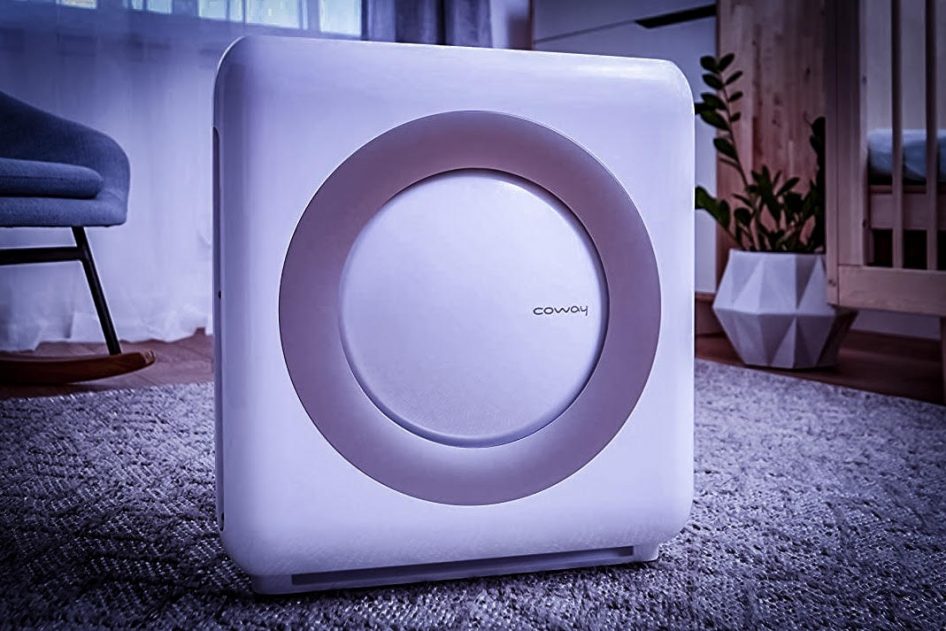 If you’re looking for a pro-grade air purifier without wanting to spend your entire bank account, you’ve come to the right place. Luckily, there are many air purifiers under $300 that do an amazing job. Most of them efficiently eliminate the overwhelming majority of pollutants while hovering in a more affordable price range.

After extensive research and reviews, we formulate d a list of the eight best air purifiers under $500. We made sure that each one eliminates at least 99% of pollutants, lasts a long time, and highly rated amongst users.

In Short, Here Are The Best Affordable Air Purifiers Below $300

First up, the Coway AP-1512HH is an excellent air purifier running well below $300. Providing True HEPA filtration, it captures 99.97% of every particle at 0.3 microns or larger. It’s a great value for the money. Better yet, it’s currently on a 13% discount, as well. Producing 77 Watts of power, it’s extremely powerful while maintaining a quiet noise level between 24dB-54-dB.

One of its unique attributes is its timer which lets it run for either 1 hour, 4 hours, or 8 hours without automatically shutting off. Many people find that feature useful since the turn it on right before leaving for work. You’ll also appreciate its three separate fan speeds. However, it also has a fan speed feature which automatically detects which can speed is best depending on the air quality!

Users Say: “So far I’m absolutely in love with this. I bought it because the apartment I moved into smelled musty and had a lingering odor from the several dogs that the previous renters had, in spite of cleaning and painting. Not only is the smell WAY better, but I realized once I plugged this in that it is the absolute perfect level of white noise. Now instead of running the whole apartment fan, I can plug this in by my bed and sleep soundly. Level 3 is a little loud but I can leave it running in the next room; level 2 is absolutely perfect. It also drowns out low levels of talking/music from the neighbors. Very happy with my purchase!!”

Running below $300, the Homedics air purifier is able to filter large rooms. However, you can get this same model for small or medium-sized rooms, as well. A very beneficial feature is its UV-C. Not only does it trap pollutants, but the UV-C also kills viruses and bacteria. Like most purifiers on this list, it has a True HEPA filter which removes 99.97% of pollutants.

Along with eliminating airborne allergens, it also removes mold spores, smoke, dust, pet dander, germs, and pollen. It too provides an auto-off timer, as well. Overall, this 360-degree air purifier is a great choice. It’s very dependable and dramatically boosts your home’s air quality. You can get it in either white or black!

Users Say: “Very quiet unless it’s on the highest fan setting which we like cause we were looking to replace the constant sound of an old fan. Has all the features and settings you would need and pleasing to the eye. Would buy again.”

The TruSens is a high-quality air purifier running under $300. There are a plethora of reasons why we love it. For one, it uniquely uses UV Light to sterilize and kill germs, bacteria, and allergens. With its 360-degree DuPont filtration, it also captures cold and virus, mold, mildew, pollen, pet dander, and dust mites. It’s known for being 24% more efficient with its bi-directional airflow. Overall, it’s a great option, and we believe you’ll be very satisfied!

Users Say: “We have 3 dogs in the house and desert landscape. I was hoping for a product that would leave the house with a clean air feel. I love this air purifier is amazing. I love the auto feature but I also love that you can set it accordingly. The nighttime feature is great because it is bright. I love the white noise sound if it but at lower levels, you can’t hear it at all. Great product and I’m ordering another for my bedroom so I don’t have to move it around the house!!”

Mainly designed for owners of pets, smoke, and allergens, the LEVOIT LV-H135 air purifier is a phenomenal bang for the buck. Not only is it below $300, but it also does an incredible job for its competitive price. With the ability to successfully filter pollen, allergies, mold, germs, and pet dander; You’ll be able to breathe much easier.

The True HEPA filter captures 99.97% of partials in the air that are a small as 0.3 microns. With its “Smart Auto Mode,” it finds air particles with laser sensors and adjusts the fan speed accordingly. If you’re about to sleep or you generally prefer it to be much quieter, the “Sleep Mode” quietly filters air at 25dB. Overall, it’s a superb choice under $300!

Users Say: “We have just used the air purifier for one day, but my wife and I both remarked at the clean, fresh scent in the room had after it had run for a couple of hours in the bedroom. We really like the look of the product. It’s clean lines and simple design resembles something Apple or Google would build if they made air purifiers. We also really like that this model is on wheels. Although it is not heavy, the casters make it easy to roll to other rooms in the house.”

Just recently, the Honeywell HPA300 had a hefty 12% reduction in price. Although we’re unsure if this discount is permanent or temporary, we believe it’s, either way, an excellent bang for the buck. This air purifier also significantly outperforms its price range for many reasons. It provides exceptional True HEPA purification, eliminates 99.97 of airborne particles, efficiently covers rooms up to 465 square feet, provides 3 fan speeds along with a turbo setting, and neutralizes odors. To top it off, it’s highly recommended by many allergists!

Users Say: “I have asthma that’s triggered by pet dander. Just added a husky to my house of two ragdolls this year and it put the hair over the “able to breathe” limit–even steroids and steroid inhalers weren’t touching it, and I was coughing and having mild but near-constant asthma attacks all year long no matter how much I vacuumed. Bought this thing and ran it on high for a few days and noticed the cough lessening. I’ve kept it on low/medium for about two weeks now and my cough is completely gone. Highly recommend for asthma sufferers!”

Next up, the Blueair is a fantastic air purifier with high customer reviews. With the purchase, you get 2 washable prefilters. It captures 99% of airborne pollutants, helps eliminate odors, and removes gases with its carbon filter. You’ll also appreciate that it has been independently tested and certified by Aham for medium to large rooms. Since it’s Energy Star rated, this purifier is very energy efficient. Overall, it’s a great choice!

Users Say: “I have a Honeywell and a Blueair air purifier. I prefer the Blueair over the Honeywell for a few reasons. The Blueair unit is a much quieter unit on its lowest setting. This is nice if you want to watch a movie or read a book. Also, I notice a lot less dust in the living room with the Blueair unit. The only option that the Honeywell has that I would like to see integrated into the Blueair is a timer.”

For good reasons, the LEVOIT LV-H133 is one of the highest-rated affordable purifiers on the market with near-flawless reviews. It effectively removes 99.97% of all airborne particles that are 0.3 microns or larger. With its activated carbon filter, it removes odors, as well. An important feature is its low noise level at 25dB. You’ll also appreciate that it’s energy star certification, FCC certification, ETL listed, and CARB certification. Overall, it’s a very dependable option and you’ll be very satisfied with it. We highly recommend it!

Users Say: “We picked up two for a 2300 sq. ft. two-story house. Because the living room is open all the way to the second story, we’ve had problems distributing heating and cooling evenly from the central HVAC system. One of the filters sits in that area, and on even the lowest setting, it has equalized temps between both floors. That’s not why we bought the filters, just an added bonus. On the low setting, you can’t hear they’re running. Medium isn’t bad. High is noisy. It’s great to be able to turn off the idiot lights since we have one in the bedroom. Our allergies have been only slightly improved. The filters both say the air quality is already good. The living room filter does kick up if I bake or broil, and the bedroom filter quickly removed fresh paint smell.”

Last but not least, the Medify MA-40 2.0 air purifier is a reliable choice for your home. It provides H13 True HEPA medical-grade filtration. After one hour, it can purifier 99.97% of pollutants in a room up to 1,600 square feet. Like the previous one, it too has “Sleep Mode” for much quieter operation.

Not only is it Energy Star certified, but it’s ETL and CARB certified, as well. You can get it in either white or black. Overall, it’s a great air purifier under $500. We recommend it for large rooms!

Users Say: “I feel so happy to finally found the perfect air purifier that has helped my son’s health issues…I purchased this unit since I read it was medical grade with H 13 true HEPA filters, so I decided to give it a try …it has been hard to find one to use in his bedroom besides the one I use for the house to keep his room clear of anything so he can breathe pure air and get better sleep…so far I am very pleased with the results…I truly recommend this unit…and also I will soon try to get another one to place it in the living room and common areas.”

Here Are The Best Air Purifiers Under $300

If you’re interested in an air purifier under $500, see our top 9 here.