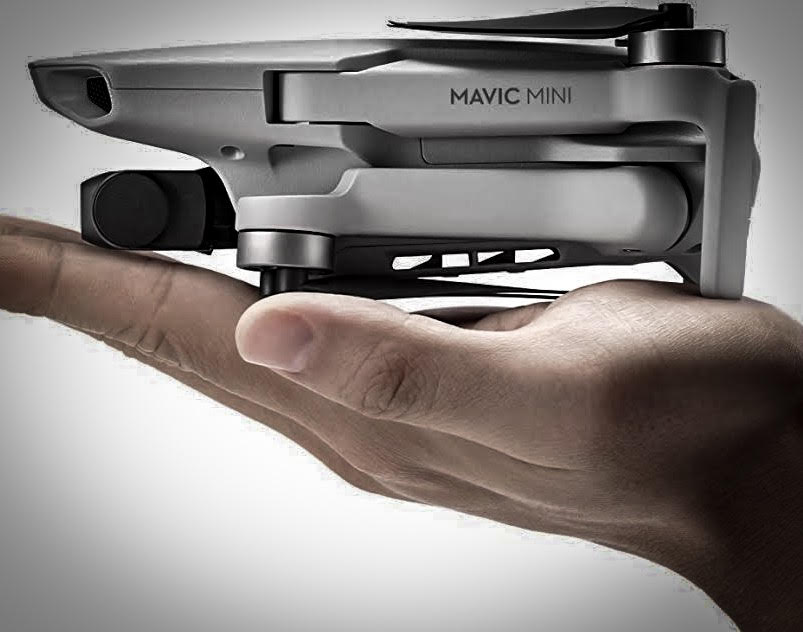 Luckily in the innovative age of technology and a competitive marketplace, companies are making mini drones with a built-in camera. Now you’ll be able to fly and take aerial videos with a conveniently small drone.

However, not all mini camera drones were made equal. Many other factors can make or break a drone such as flight time on a full battery, active tracking features, panorama, video resolution, reliable flight, and build quality are also essential factors. Nonetheless, after extensive research and reviews, we formulated a list of the 9 best mini drones with a built-in camera.

In Short, Here Are The Best Mini Foldable Camera Drones In Every Budget

For a good reason, the DJI Mavic Mini is one of the highest customer-reviewed mini camera drones on the market. It’s also one of the very best valued drones considering it’s much more affordable than most. You can either get it as a drone separately or as a bundle for a little more.

It takes crisp 12MP photos that outperform the price. However, the most impressive attribute is its high resolution of 2.7 HD quality. If you’re not familiar with 2.7HD, it’s basically 2.7 times higher resolution than standard 1080P.

On a full charge, it provides a surprising 30 minutes of flight time. The main secret for its phenomenal flight time at such an inexpensive price is due to its lightweight of 0.55lbs. Offering a 27MPH max speed, you’re able to capture cinematic aerial shots.

Keep in mind; this drone is extremely compact. But don’t let the small size fool you. It’s very reliable and shoots great video quality. Overall, we explicitly recommend it for anyone looking for the best camera drone at the cheapest price possible!

Users Say: “It literally doesn’t get any better than this unless you spend 500 more. I’ve had my battery charged for a couple of days and your not supposed to leave them charged for a long period of time. so last night I turn it on in my living and hit launch on the controller and then set my controller down. This drone hovered right there without moving an inch while I watched my show. When your flying it’s so smooth and only does what you tell it to. The pictures and videos are amazing too.”

With a built-in camera providing 720p resolution, the SIMREX X300C is an excellent option. It’s the most inexpensive mini-camera drone on the entire market. However, its overall performance outperforms its price. With a full charge, it gives you an 8-10 minute flight time. You’ll also appreciate its ability to do flips and rolls!

Users Say: “It is a lot smaller than I expected but I wanted to start with a small and manageable drone first before I get into more expensive models, so this definitely fits the purpose. The maneuver takes a bit of time to learn but once you get used to it, it becomes pretty easy to control. It flies high enough as a toy drone. Battery life was decent. Video quality is acceptable at this price level.”

Here is yet another foldable compact drone with a built-in camera. The SNAPTAIN A15H is highly rated and reviewed among customers. It provides 720p resolution and various useful features!

Users Say: “This is a fun drone with a good price. Very easy to control for a beginner and It’s strong even I crash two times so far and it still works. I bought some other band before, once it crashes then it will break right away, but this drone is very tough. I will recommend this to the kids. My son and I have a good time playing this drone together.”

Amazingly, the DJI Mavic Air had a massive price cut of 22% from its original price. Although we’re unsure if this discount is permanent or temporary, we believe it’s either way, the very best mini/foldable drone. However, this drone is larger than most other drones on this list. We thought it was appropriate to add this as a mini drone considering it’s still smaller than the average drone and it’s very compact once folded.

There are a plethora of reasons why we love it. For one, the camera shoots stunning videos and pictures. Possibly the highest quality on the list, it shoots crisp 4K/30fps resolution at 100mbps. Not only does it capture vivid UHD videos and pictures, but the panoramas are also remarkable. It combines 25 photos to construct an impressive 32 MP sphere panorama. On top of that, it’s one of the most compact and portable 3-axis gimbal camera drones on the market.

Not including the micro SD card, the internal storage offers 8GB. You’ll also appreciate the Active Tracker, foldable drone, burst shot capabilities, and slow-motion videos with 1080/120fps. Overall, we believe the DJI Mavic Air is the very best foldable drone with a built-in camera. We highly recommend it!

Users Say: “Love this entirely. I’ve never flown a drone before but I have played a lot of video games. If your naturally good at video games, you’ll definitely pick up the flying faster. Autonomous features are outstanding. The only complaint I have is that the still image 12mp camera is a bummer. Getting a higher mp camera must be their focus on the next generation bc everything else has been completely fine-tuned. I use this for my real estate and for my nature adventures.”

Next up, the Holy Stone HS165 is an excellent mini-camera drone that’s very portable. It provides a full 1080 HD resolution with its built-in camera. For the low price under $200, the picture quality is great. You’ll appreciate the extremely long 28-minute flight time, as well. With its Auto Return Home feature, it automatically comes back to its starting point with a push of the button.

Another beneficial attribute is its Circle Fly mode which circles a set area. Offering 5GHz Wifi capabilities, you’ll be very satisfied with its overall performance. Overall, it’s an amazing foldable drone with a built-in camera. It’s very inexpensive, provides HD definition, and has an abundance of features!

Users Say: “One word: Impressed! I was interested in a budget quality drone for some basic photos of the land and to just learn basic flying skills. I had this drone flying in a few minutes and took some great shots of my property. I also was able to check on my roof without climbing a ladder. The flight Tim was around 10 minutes. The recharge went fast. The only feature missing is collision avoidance, but that is usually reserved for big-dollar drones. I recommend this drone for beginners. It’s affordable and well designed. I like the case too.”

The Yuneec Mantis Q YUNMQUS is a great but inexpensive drone with a built-in camera. It too has an impressive flight time of 33 minutes. Coming with the purchase, you get a remote control, a power supply, USB Type C cable, a battery charger, an adapter, and one battery. a full set of propellers.

One of its primary benefits that stand out is its high-quality 4K resolution. Not only is the video quality amazing, but it also takes 4800×2700 high resolution still photos. Overall, it’s a fantastic mini-camera drone at a competitive price. Be sure to check out the reviews below!

Users Say: “I had another drone which I now consider a toy. It would not hover, battery life was about 5 minutes, and picture quality was grainy. Needless to say, my first experience was terrible. That drone has bit the dust. A friend who is in a radio-controlled airplane club gave me the recommendation for the Mantis Q. Others have complained about the non-gimballed camera, but that seems to be all they complain about. For a flight time of 25 minutes and the $399 price point, it is a great value. I am a complete novice and I found this drone very easy to navigate. I think this is an entry-level drone that although still a toy, sets itself apart from drones found in the toy aisle.”

Running under $50, the Potensic A30W is a great mini camera. This drone is foldable and very compact. It has 500mAh detachable battery giving you 6-8 minutes of flight time. You might enjoy the auto-hovering mode, as well. With its high-quality 720P HD resolution, you’ll be delighted with the picture quality for the minuscule price.

There are a few downsides to this drone. Many users had a bad experience trying to control this drone during flight. There are also a few instances of this drone’s battery dying much sooner than the 5-minute flight time. Aside from that, it’s a decent mini video drone with a built-in camera.

Users Say: “This is a fun little drone. I received it today and it was a rainy day so I flew it around the house. This is a great beginner drone just to get a hang of it. The altitude hold works pretty well. The camera quality is good for the price. I would suggest popping the little antenna out of the drone to get better reception. I wish it came with more than one battery tho. Pretty cool that you can adjust the tilt on the camera (by hand). It has a few interesting flying modes. I had lots of fun flying this thing around the house today.”

Last but not least, the SNAPTAIN A10 is a mini foldable camera drone with near-flawless customer reviews. With its 720p resolution, its video quality dramatically outperforms its meager price.

It’s the second cheapest camera drone on this list. On top of the 720p resolution, the voice control capabilities, Headless Mode, G-Sensor, Trajectory Flight, and Circle Fly features are beneficial attributes. Unfortunately, this drone only gives you a 7-minute flight time on a full battery.

You’ll also appreciate its 3D flips, as well. Overall, it’s an excellent mini drone with a built-in camera for an affordable price!

Users Say: “The drone is a very good option for the beginners. You can give it as a gift to your lovely kids, and they will be a lot happy!! It has two batteries and each of them takes about 50 minutes to be fully charged which is good for daily play. Also, having two batteries makes you able to fly if you have lost one! Just one note that to keep the drone at a fixed height, it needs a little try. You need to handle keeping it at the right height above the ground using the controller. Overall, I am happy to buy this one.”

Here Are The Best Mini Camera Drones In Every Budget

If you’re interested in an affordable camera drone, see our top 7 here.