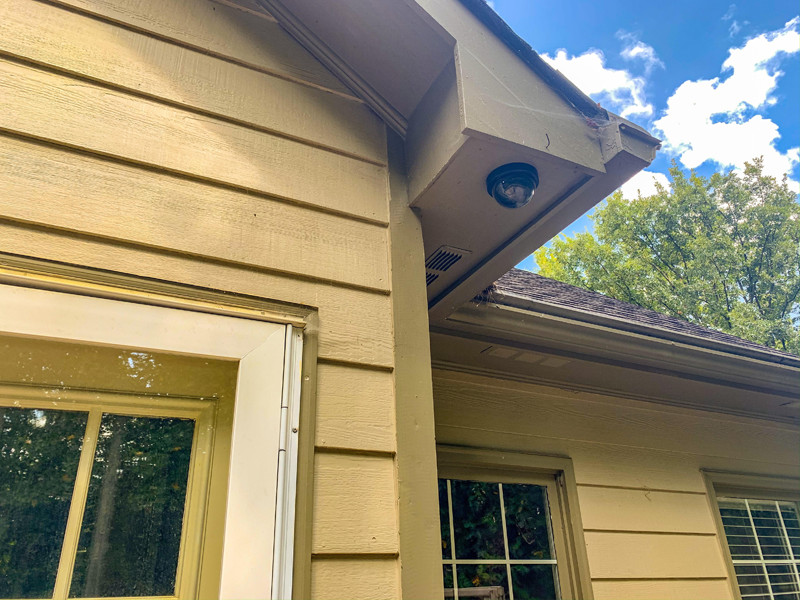 What’s the best fake dummy security camera with a red LED blinking light? Although experts say the blinking light is less realistic than a real security camera, let’s face it, crooks are dumb. If they weren’t dumb, they would get a job like the rest of us to make money and buy things.

Most people believe the red light adds an authentic effect that will deter criminals at a much quicker rate. Not to forget, the blinking light makes the fake camera more visible at night time. Without further ado, we formulated a list of the 9 best simulation security cameras with a red blinking light after testing and extensive research.

In Short, Here Are The 9 Best Fake Security Cameras With A Blinking Red Light

First up, the WALI Dome fake security cameras have a blinking red light. It comes with added accessories allowing it to be attached to your ceiling or wall. I’ve found it to look the most realistic, attaching it to a ceiling. In one scenario, these dummy cameras were able to trick police officers who were asking to see a user’s footage due to a neighborhood incident.

What I like about them is it comes in a pack of four, allowing you to spread them how you wish. Running below $15, they are easy on the wallet. You get four warning stickers with the purchase, as well. Each security camera takes 2 AA batteries for the continuous blinking red light.

Overall, these fake cameras are an excellent deal for what they offer. We recommend them to anyone who prefers mounting them on a ceiling.

Users Say: “They were delivered on time and work very well. After putting in the batteries the red blinking light works perfectly. I set these up in various parts of my company to ensure employees were not taking long breaks, etc. They have been working so far and the best part is that everyone believes they are remote controlled and can be viewed on my phone, laptop, and tablet.”

Here is another pair of four fake security cameras with a red flashing light. The FITNATE is a great choice as it comes with the accessories to mount against a wall and four warning stickers. Made out of sturdy ABS plastic, these dummy cameras are built to withstand harsh outdoor conditions for extended periods of time.

Each camera takes two AA batteries to power the red blinking light. However, the batteries are not included in the purchase. The camera itself is 360-degree rotatable making it easy to adjust after mounting. This quad pair of dummy cameras is a great buy for the budget.

Users Say: “They look like the real thing. Our employees are all fooled.”

Here is another quadruple set of fake security cameras used to mount from the ceiling. Running under $20, the Armo dummy cams are an affordable investment to deterring criminals. Each one has a red blinking LED light. The primary downside I’ve noticed about them is how quickly they eat up batteries.

Each camera takes 3 AAA batteries, and they last for about 3-5 weeks. Thus, a decent amount of money will be used on AAA batteries alone for the red blinking light. Besides that, these cameras are relatively realistic and are running at an affordable price. It’s also easy to set up and mount, as well.

Users Say: “Great product. Received it on time. It is exactly as described and works great to deter people from mischievous activity. Placed eight of them spread out at a commercial property I manage and is working great. Highly recommend for anyone looking for a quick and cheaper solution to criminal activity.”

Next up, the IDAODAN is a high-rated set of dummy security cameras with a red flashing light. This pack of four look relatively realistic and are very well priced. Each camera comes with three screws making it easy to mount against a wall. Also, coming with the purchase is 8 warning stickers.

Especially at further distances, the wire coming out of the backside of each camera adds an authentic effect. Overall, these dummy cameras are a great buy.

You can use them outdoors, indoors, in your home, or in business. The main downside I noticed was the difficulty of replacing batteries while it’s attached to the wall. It’s best to remove the camera from the wall before changing the batteries. Each camera takes 2 AAA batteries.

Users Say: “These dummy cameras are just what I expected. They have been installed for several months and are holding up. We have real cameras as well & these look equally authentic.”

Currently, Amazon’s best-seller, the BNT is an excellent pair of fake security cameras with a flashing red light. You can get them in a pack of two or a pack of four. In my personal opinion, these cameras don’t look as realistic as the others on this list.

However, many people believe they are very realistic looking. The only downside I noticed about these cameras is their cheap build quality. After all, they are very cheap themselves. If you’re going to install them outside, you may need to find an area to keep them safe from vigorous weather.

Users Say: “Absolutely the finest simulation of a security camera I’ve ever seen. I’ve bought two other dummy cameras, and neither one really looked real. Everything about this camera has the look of the cameras being sold currently in sams club and Costco. I would definitely recommend them to anyone.”

Next up, the F FINDERS&CO is one of our favorite sets of fake security cameras with a red blinking light. One of their strongest attributes is their tough build quality capable of withstanding vigorous weather conditions. Another thing you may like is the realistic design and color. However, you can also get them white, as well.

They are easy to install and adjustable. Coming with the purchase are three screws per camera and four warning security alert stickers. Overall, we believe this quad pair of dummy cameras are one of the better choices. We highly recommend it.

Users Say: “The value was awesome, my neighbors think all of these cameras at my gate are real they look so real! I’ve had them a couple of months and I have not had to change the batteries yet the red light is still flashing.”

Primarily made for indoor use, the Lebote is an underrated but realistically designed set of fake security cameras. Each camera takes 3 AA batteries for the red blinking light. However, they look pretty realistic with or without the LED light. These cameras are possibly the best for business or commercial use. With a great build and shape, they’re an excellent choice.

Users Say: “Works great for what we want! There is a guide to help you place them, and I’ve fooled everyone with mine! The flashing light is a great touch! These will keep my nose house sitter, out of my closet! Thanks!”

Just recently, these cameras had a price cut of $8, knocking it down to $22. Unsure whether the discount is temporary or permanent, we still believe the WALI fake security cameras are one of the top choices. It’s also one of the most popular simulation camera sets on the entire market.

Due to the shape, build quality, and wire on the back; They look very realistic. Each camera takes two AA batteries for the flashing red light.

You can get them in a pair of two or a set of four. Either way, they’re very highly rated and customer-reviewed. The materials used are very tough for their low price.

Coming with the purchase is three screws per camera, four steel brackets, and warning stickers. Overall, the WALI dummy security cameras are another one of the top choices to go for. We highly recommend it!

Users Say: “I bought these to install on my in-law’s home. I’ve installed over 100 ‘real’ cameras over the past 5 years. These pretend cameras look like legit cameras, though perhaps a bit larger than I would prefer. Still, I’m very happy with the results. It took about five minutes to install each device. I installed lithium AA batteries to power the blinking LED in hopes the light will keep working for a year or so… we’ll see!”

Almost identical to the previous set of dummy cameras, the Armo Bullet is an excellent choice, as well. Very highly rated and popular on the market, they look realistic and have a red blinking light. They are easily mountable against a wall or tree. Coming with the purchase are screws for mounting and warning stickers.

Usable for both indoor and outdoor use, they have a decent build quality. These fake security cameras are a great choice for anyone on a budget.

Users Say: “They look very good from a distance so mount them beyond normal reach. A red light blinks using 2 double “a” batteries. I don’t know how long the batteries will last so I used lithium batteries Overall I think these cameras offer a reasonable security solution at a very good price.”

Keep in mind that our opinion is not the end all be all. Like mentioned earlier, everyone has different needs, requirements, and budgets for their fake security camera. However, our winner is WALI for a few reasons. It’s the most durable, a great bang for the buck, and in our opinion the most realistic looking. It’s also the one I personally decided to keep for my home outside.

If you’re interested in a pair of noise cancelling headphones, see our top 5 here.

Looking for a true wireless earbud under $150? See our top choices here.

Interested in a pair of USA made sunglasses? See our top choices here.

Top 12 Best Sunglasses Made In The USA