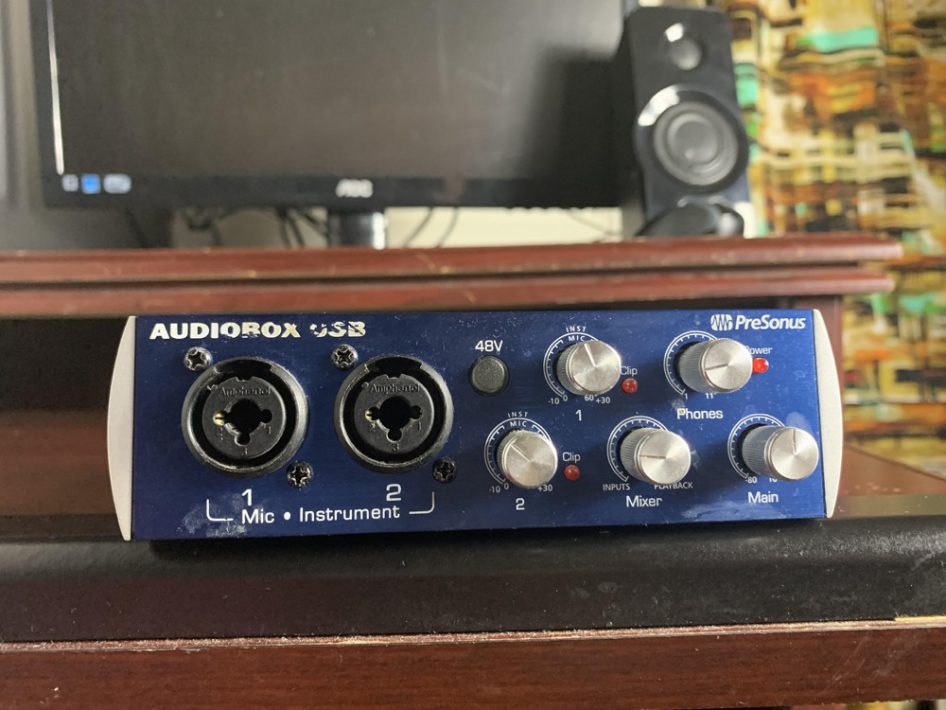 I have been in the same shoes as many of you are in right now. Where your in need of an audio interface that can produce the highest quality recording possible on a tight budget under $150.

Whether your doing podcast, live streaming, voiceovers for YouTube, or building a home studio with a tiny budget like I was; we all take our art seriously and could not afford our passion being ruined due to a low-budget.

To make a long story short, through personal experience and extensive research for some time now, we have narrowed it down to the 5 best audio interfaces under $150 on the market.

In Short, Here Are The Best Affordable Audio Interfaces Below $150

First up, the Focusrite Scarlett Solo is an outstanding audio interface under $150. Just recently, it had a hefty 21% price reduction. Although we’re unsure if this discount is permanent or temporary, we believe it’s either way a fantastic value.

There are a plethora of reasons why we love it. For one, you can record and mix your performance takes up to 24-bit/192kHz. It also provides a useful feature called “Air Mode” which gives your instruments or vocals an airy sound with more clarity. To enable “Air Mode,” push the button on the front face under the gain knob labeled “Air.”

Another beneficial attribute is it provides 48V phantom power. This gives you the ability to use high-quality condenser microphones. Not only is it Bus-Powered, but you’ll also enjoy its easy setup. Overall, it’s an outstanding choice with near-flawless reviews amongst users. Better yet, it’s one of the most famous interfaces on the market!

Users Say: “This is one of those Amazon purchases I won’t be able to use for a while, so I will return to finish my review as soon as I can. I am moving my studio, so it will be a couple weeks. I wanted to jump out there and say I have wanted a product like this, and the other reviewers are happy with their purchases. I peeked into the box and liked what I see so far. The 4i4 has all the features I will need.”

About six years ago, when I was entirely broke, I decided to record my first album under the band name “Carnelia”. Although I didn’t have the funds to do it, I was deadset on getting it done regardless of the sacrifice. My goal was to purchase the very best audio interface that produced the most excellent sound quality at the lowest cost. I did the very best research I possibly can to find the best bang for the buck interface on the market. After a pot of coffee and 16 hours of staring at my computer while calling a few of my audio geek friends, I took my chances on the PreSonus AudioBox.

To make a long story short, I got right to recording my solo album and I could not be happier with the microphone I chose to this day. I ended up using the PreSonus AudioBox interface and the Audio-Technica AT2020 condenser microphone to record all of the acoustic guitars, vocals, back up vocals, and harmonica on the album.

It was able to perform exceptionally well with the two entirely different voice types on the album. The other singer, Trent, had a much deeper voice where mine was more soft and airy. Nonetheless, I was more than pleased with this interface. Below are a few songs I used the PreSonus AudioBox to record acoustic guitar and all vocals. Keep in mind, the microphone used is an inexpensive $100 mic.

Songs Below: The PreSonus AudioBox was used to record acoustic guitar and all vocals

Users Say: “Wouldn’t respond until I looked online and found some users who ‘discovered’ that this product was not compatible to run through USB 3.0. Luckily I had 3 USB 2.0 ports on my computer and tried it there with success. It is a very good unit and having stereo inputs makes this valuable for recording new songs and converting old cassettes and vinyl to digital.”

The BEHRINGER UM2 is a remarkably high-value interface that is definitely, in my opinion, the very best bang for the buck on the market. It’s a bit strange to me. How is it possible an audio-interface at such a low price is customized to record vocals and instruments. Not to forget, it has multiple features you typically see from an interface at a much higher price. I’m also puzzled as to its ability to stand toe-to-toe with many interfaces quadruple its price. In terms of sound quality and features, the UM2 is well underpriced.

In my personal opinion, I think the only reason it’s at the extremely low-price is due to its plastic build. The majority of the other interfaces on the market are made out of metal, which is much more costly. If you need an extremely cheap audio interface with an exceptional sound quality for a home studio, the BEHRINGER UM2 Audio Interface is a perfect choice for you. If you’re going to need a more durable unit while doing a lot of traveling with it, I recommend an all-metal interface.

The Sound Quality of the BEHRINGER UM2 Audio Interface will most definitely surprise for its extremely low-budget price. It not only offers 48V phantom power to record condenser microphones, but It also records the audio of either vocals or instruments in 48kHz resolution. Like mentioned earlier, in terms of sound quality, the BEHRINGER UM2 can be compared to interfaces quadruple its price.

It’s able to record both vocals and instruments exceptionally well. The MIDAS preamp produces an immaculate and crisp sound. Even if you’ve been in the recording game for a while, the BEHRINGER UM2 will still surprise you. You will not be able to tell there is any added audio coloration. In my opinion, it’s best that way for better post adjustments. Many other users of this interface other than myself claim its audio conversion is well above its price range.

The only real downside of the BEHRINGER UM2 Audio Interface that I could find is its build quality. Considering its extremely low price, the only way to sell this product is to make it out of plastic. Most interfaces are either made of metal or have a metal casing for added protection. Interfaces made out of plastic are far more susceptible to damage.

However, if you’re not planning on traveling with the BEHRINGER UM2, it will be just fine. I recommend this unit for home studios of any sort in which moving or traveling with it is extremely minimal.

Users Say: “I spent a lot of time agonizing over which audio interface to buy. There are so many choices, it was hard to choose. I ended up buying the Behringer mainly due to cost, and I had read that Behringer has been improving quite a bit in the past couple years (they used to be a very “budget” brand). I was not disappointed. I use this to record drums, guitar and voice from various devices into GarageBand on my Macbook Air and I’ve had no trouble at all. It sounds great, with a low noise floor and really good response. Behringer has really upped their game. So far so good!”

Next up, the Rode AI-1 is a great but affordable USB audio interface below $100. With its Neutrik combo jack, your ability to plug in either an XLR for your microphone or quarter inch for your instrument. It also provides phantom power. With a 24-bit and a sample rate option between 44.1, 48, 88.2, or 96kHz, you’ll be very satisfied with it. Be sure to check out the reviews below!

Users Say: “BEST little preamp I’ve ever purchased. CloudLifters are great and portable but having the USB capability is so nice on this. There is literally NO NOISE on a 14′ mogami xlr cable to my Shure SM7B…I’m overwhelmed at how nice this preamp is. I debated on this and focusrite and couldn’t be happier. I’ve been using this for voiceovers for film work and podcasting. Absolutely and utterly worth the money…I wouldn’t be surprised if this jumps in price soon due to the insanely popular podcast format again. Make no mistake, this is a piece of professional equipment despite its small size.”

Last but not least, M-Audio AIR is the most affordable USB audio interface in the current market. It offers a 3-port hub, 24-bit/96kHz resolution, and a 1/4 headphone out. We primarily recommend it for those looking for the cheapest possible interface that will still do the job!

Users Say: “Much better than imagined. I was worried after some of the reviews here and on YouTube mentioned the headphone volume being too low, but I absolutely have no issue with the headphone volume. This was very easy to set up as I already had an account with M-Audio. This is great for my laptop. I will definitely buy another M-Audio interface in the future to replace my Behringer UM2 as the response time is much lower on my Midi devices. Even with the lowest buffer I could get decent sound.”

Here Are The Best Audio Interfaces Under $150