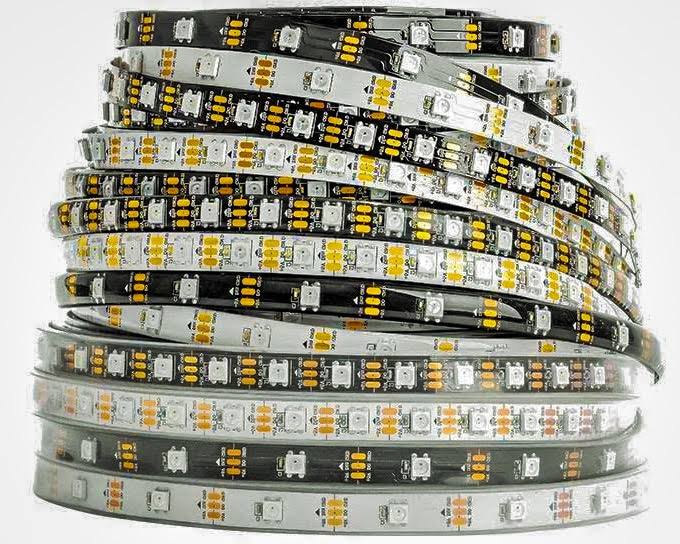 There are endless possibilities with programable LED strip lights. Depending on which ones you get, you can creatively program your own light sequence. Most light strips use Arduino to create beautiful light displays.

However, there are other programable controllers you can use such as Teensy, K1000C, T1000S, Raspberry Pi, and others. Others have their own customized smartphone app. After extensive research and reviews, we formulated a list of the 8 highest-rated choices!

In Short, Here Are The Highest-Rated Programmable Led Light Strips On The Market

First up, the ALITOVE WS2812B is an excellent programmable LED Light strip. Right off the bat, you’ll love how the color of each pixel is fully customizable. Producing 90 watts of power, 256 gray levels, and 24-bit, the colors are gorgeous and impressively vibrant. You can use these lights for pretty much anything. Since they’re IP65 waterproof, they’re compatible with the outdoors, as well.

When you compare them to other light strips, these lights offer more length than the money at 16.4 feet and 300 total lights. You can use these lights with Teensy, K1000C, Arduino, T1000S, and Raspberry Pi. Another beneficial feature is its flexibility and easy ability to install just about anywhere!

Users Say:  “Nice colors. Bright if you use the correct power. I used this for my freestyle drone using 10 lights on each side and programmed it to change colors to directional movements.”

Also providing a sizable length of 16.4 feet, the MINGER DreamColor is an outstanding programmable light strip for an affordable price. The app used to control them is Govee Home which connects to your lights via Bluetooth. To make it even easier, Wi-Fi isn’t even needed. The App makes it incredibly easy to use for anyone.

But aside from the programable capabilities, you’ll also love the additional attributes these light strips offer. They’re sizable at 16.4 feet long, possess strong adhesive tape, and conveniently waterproof. You’ll also love the timer switch programming it when to turn off and on via the app.

These strips are wildly popular with near-flawless reviews across the board. And finally, they’re built for maximum longevity with 50000 hours of total life. Overall, they’re an incredible bang for the buck running below $30!

Users Say: “This is an awesome light strip! It works quite nicely as bias lighting for your TV and also is great for mood lighting and is great party light when you set it to music mode. It responds very nicely to music and the app is very easy to use and works great. I would love to see more programs and settings in the app. But otherwise, it’s perfect.”

If you only need a short LED strip light of only 3.2 feet, the ALITOVE is a top contender with programmable capabilities. Like the very first Alitove on this list, these have 256 gray levels, 60 pixels, and 24-bit full-color display. Unfortunately, they’re not waterproof. They’re addressable and on the backside, it provides self-adhesive tape to practically place it where you like. Another positive factor is its impressive brightness and color for the affordable price!

Users Say: “I used these for a pumpkin head I made. They were super easy to program on the Arduino using the fast LED library. Besides that, these guys are BRIGHT. The best part is you can use 5v power, so I had the Arduino and these on the same power supply. They also have a 5v and ground cable attached in case you want to use another power source, but I ran mine straight from the Arduino without a problem, so I just cut those two additional cables.”

Providing an immense 300 LED lights, the BTF-LIGHTING WS2812B is an amazing choice for programming. It’s compatible with Arduino, T1000S, Raspberry Pi, Teensy, and K1000C. Although they’re not waterproof, you’ll love their length of 16.4 feet, vibrant colors, and impressive brightness. As a matter of fact, many people can’t look directly at it when these lights are on full brightness. Better yet, the lights also don’t get too hot.

Users Say: “I was creating an ambient light to add lighting effects around my computer monitor and needed independent controlled LED’s for my Arduino to manage. These worked great. I cut them in lengths for each side of my monitor, soldered them together, and programmed the Arduino/pc. Worked great. Time will tell how they hold up and perform. Good first impression though for my needs.”

Coming in two different styles, you can get the Aclorol WS2812B with either 150 LED lights or 300 LED lights. But keep in mind, they’re both the same length of 16.4 feet. It primarily depends on how spaced out you prefer each light from one another. Not only are these strips independently addressable, but they’re programable with Arduino and FastLED library, as well.

You’ll also appreciate the option to get them as nonwaterproof, or IP67 waterproof. These strip lights need a controller and 5V power supply to get started. Unfortunately, neither is included with the purchase. When it’s all said and done, the LED lights are pleasantly consistent and it’s a reliable option for the inexpensive price. The primary downside is the few complaints of receiving them with slight damages.

Users Say: “This is my first try at addressable LED strings. The connector wires on my strip are Red=+5V power, Green=Data (5V logic level), White=Ground. I ran them from an Arduino-style board. Remember you need 5V logic levels, 3.3V does not work with this device. I started with the Fast LED demo programs and then modified the code for various effects. Everything worked as expected. I was satisfied with the product, it’s a pretty cool thing!”

For those looking for programmable strip lights with superior length, the Hiceani produces 65.6 feet. But that’s not the only reason people love them. They conveniently come with their very own app using Bluetooth for easy control. Keep in mind, the primary programmable features are its ability to sync with music and the added timer function.

Both the app and the included 24-key remote provide the programming capabilities. In case you would rather a slightly smaller size, you can get this strip light as a 50-foot length, as well. Overall, it’s a fabulous all-around choice and we highly recommend it if you need a long size!

Users Say: “Another wonderful product! I am very pleased with the new double strand of light from this company. Very easy installation of multiple QR code locations for the app controller. The app works amazing I could control the lights from across the house so if I forgot to turn them off when in bed I can also have a timer so it will shut down on its own at a designated time frame. Another thing I like is that the remote doesn’t work on the same frequency as my other lights n I can control them separately. I’m grateful I have found an awesome company for led lighting. Thanks again for another awesome product!”

Here is yet another 16.4-foot programable LED strip lights. Along with high marks amongst users, the CHINLY are individually addressable. Considering they’re IP67 waterproof, you have the option to use them indoors or outdoors. Another feature worth mentioning is its programable compatibility with Arduino, FastLED library, ready-to-go library, and Raspberry Pi.

The moment you turn it up all the way, you’ll be more than pleased with its enhanced brightness and vivid colors. You’ll appreciate how accurately they react to the programming, as well. Like many on the market, they’re precisely 16.4 feet long with 60 lights total. We highly recommend them if you want to use programable lights for the outdoors as well as indoors. Either way, they’re a dependable option!

Users Say: “I like ’em! I’ve already bought more and will keep buying them. They made a great display on my kid’s hospital window at Christmas, you could see them all the way from the main road! My kid and I had a great time painting his windows with holiday themes and then using the lights to outline and animate the displays. We programmed them using an Arduino Nano and had them festively blinking and swirling around in lots of fun patterns. We’re looking forward to doing the same and more on our home when next Christmas rolls around.”

Last but not least, the ALITOVE is another exceptional light strip choice. With programmable capabilities, it’s compatible with Raspberry Pi, K1000C, Arduino, and T1000S. They are IP65 Waterproof, 16.4 feet long, and offer 300 LED lights. The main drawback is the lower-than-average construction compared to others on the list.

Aside from that, you’ll appreciate the good customer-service and self-adhesive back. Besides that the white light is a bit average, another positive characteristic is the great brightness and colors.

Users Say: “It had been a while since I’d programmed anything Arduino but I had a Teensy 3.0 laying around and these LED strips worked great once I used the FastLEDs library to control the WS2811 chips in it. I tried NEOPixel (as seen in a picture on this product listing) but could not get it to work until I used FastLED. I still have a lot to learn but this is a great product so far!”

Here Are The Best Programmable Led Light Strips For The Money

How much do standard LED strip lights cost?

The majority of led strip lights cost anywhere between $14-$38. Some of the higher-grade strip lights can cost around $54 and up. On the other hand, TV strip lights are generally cheaper.

How much electricity do strip lights cost to run?

What are strip lights?

An LED strip light is a skinny but long circuit board with mini LED lights evenly spread out. The circuit board is flexible and able to stick just about anywhere. They’re best placed behind objects for a pleasant backlighting appearance. They come in various color options and most can change colors, as well.

Can you cut strip lights?

Yes, you can cut LED strip lights. Depending on the strip lights, they generally provide markings for cutting points between 5-10 centimeters.

When do LED strip lights burn out?

How much are TV customized strip lights?

Strip lights designed to backlight your TV can run anywhere between $9-$27.