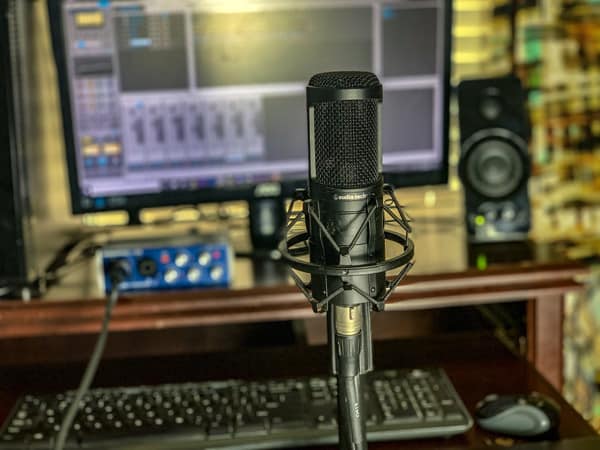 What is the Absolute Best Condenser Microphone Under $100? I have been in the same shoes as many of you are in right now. Where your in need of a condenser microphone that can produce the highest quality recording possible on an extremely tight budget.

Whether your doing podcast, live streaming, voiceovers for YouTube, or building a home studio with a tiny budget like I was; we all take our art seriously and could not afford our passion being ruined due to a low-budget. To make a long story short, through personal experience and extensive research for some time now, we have found the winner for the absolute best condenser microphone below $100.

The absolute best condenser microphone under $100 is the Audio-Technica AT2020. It produces the most exceptional sound quality and versatility for the price while maintaining excellent longevity.

About five years ago, when I was entirely broke, I decided to record my first album under the “band name” Carnelia. It was a goofy concept album where my buddy Trent and I were going to record all the instruments and sing. Although I didn’t have the funds to do it, I was deadset on getting it done regardless of the sacrifice.

My goal was to purchase the very best condenser microphone that produced the most excellent sound quality at the lowest cost. At the time, I had roughly $300 in my account which was barely enough to get the few things I needed; a cheap microphone, a cheap interface, an XLR to connect the mic to the interface, a mic stand, pop filter, and a mic shock mount.

I did the very best research I possibly can to find the best bang for the buck microphone on the market. After a pot of coffee and 16 hours of staring at my computer while calling a few of my audio geek friends, I took my chances on the Audio-Technica AT2020. It was the very best microphone for the budget I had with the information I could find on it at the time. The second it arrived I got straight to work.

Considering my extreme lack of experience in recording audio back in 2014, I was lucky the set-up between the mic and my new PreSonus AudioBox USB interface was much easier than I imagined.

To make a long story short, I got right to recording my solo album and I could not be happier with the microphone I chose till this day. I ended up using the Audio-Technica AT2020 to record all of the acoustic guitars, vocals, back up vocals, and harmonica on the album.

It was able to perform exceptionally well with the two entirely different voice types on the album. Trent had a much deeper voice where mine was more soft and airy. Not to forget, my voice is also quite nasally in which the AT2020 was able to smoothen out quite well. However, we will get into the tech specs and the reasons why the microphone is quite versatile a bit later. Below are a few songs off that album of the Audio-Technica AT2020 being used with a cheap PreSonus AudioBox USB interface.

The Audio-Technica AT2020 has been said to be the “Industry standard for condenser microphones in its price range.” It requires 48V phantom power that must be provided by a separate interface. The mic feels like it’s built to last with its solid all-metal body. And quite frankly, I have owned it for 5 years now without a single problem.

It has a cardioid pickup pattern meaning the mic only picks up the sound that’s directly in front of it. The off-axis for this microphone is very good, or in other words, it works great at rejecting background noise. If you’re trying to record audio in a noisy environment for whichever reason, it will suit you well.

The AT2020 provides a full frequency response of 20Hz-20kHz picking up every frequency in the audible spectrum. It can be used for recording nearly every instrument. However, it worked best for me on vocals, acoustic, and harmonica.

It has incredibly high SPL handling at 144dB with an exceptional dynamic range. Those technical details are not only great for the mics at the low price, but for condenser microphones in general as well. The high SPLs make the microphone worthy of the loudest of singers or instruments. It’s one of the few reasons that give the AT2020 the ability to be extremely versatile as well. With the capability to handle thunderous sounds without distorting, many people use the Audio-Technica AT2020 for drum overheads, guitar cabs, and bass cabs as well.

Above shows the Audio-Technica AT2020’s frequency response curve. As you can see, there is a minor boost in the “airy frequencies” starting around 6K. I’m personally a sucker for “airy” frequency boost for microphones considering the added depth, clarity, and crisp directivity it has to offer. What will most likely surprise you about this microphone once you first test it out is its ability to capture the tiny nuances of what’s directly in front of it.

Audio-Technica AT2020 Is Best Used To Record The Following

Is There A USB Version Of The Audio-Technica AT2020?

Yes, there is a USB version of the Audio-Technica AT2020. It is called the Audio-Technica AT2020USB in which you don’t need to add an additional interface for it. However, while the USB version may benefit a Livestreamer, podcaster, or youtube voice-overs; I recommend the standard version for home studios in need of recording instruments or vocals.

The Audio-Technica AT2020 comes with a stand mount and mic pouch.

Keep in mind that the AT2020 does not come with a few needed accessories. It requires an additional interface with +48V phantom power. Like mentioned before, the interface I used for my album is the PreSonus AudioBox USB. Other additional purchases you will need with the Audio-Technica AT2020 is a pop filter, mic stand, XLR to connect the mic to the interface, and a shock mount.

The Audio-Technica AT2020 is the very best condenser microphone below $100. It’s incredibly versatile, sounds very good, able to capture the nuances of instruments or vocals in a very accurate manner, very durable built to last, and the technical details are highly impressive for the price. Be sure to check the reviews before making any purchase on anything. If you need a budget-friendly interface, check out the Best Audio Interface Under $50 On The Planet.

Good luck and enjoy the journey!