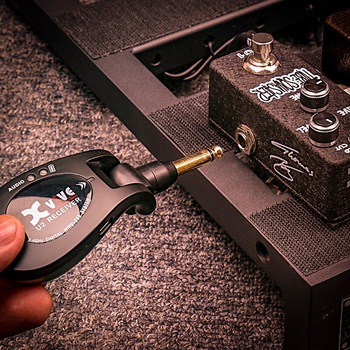 Here are all the wireless guitar systems separated in 4 categories depending on the type of receiver you are using, along with specifics for setting up each unit.

I used to own a line 6 G10, and it fit perfectly in my pedalboard. Most Tabletop receivers are charged by a Dc power supply that comes with the system making it convenient to attach to your pedalboard. A USB cable charges a select few TableTop receivers.

List of Wireless Systems with Table Top Receivers, along with Charging/Frequency Connection Details.

A Combination Plug Receiver is basically a plug with a quarter-inch attached in which you plug directly into your Amplifier or pedalboard. When Plugging directly into your pedalboard, be sure to connect it in the input of the last pedal on your board just like you would plug in the cord from your instrument.

Most combination receivers/transmitters are charged by micro USB that comes with the system. These systems are generally easy to operate. Most of these systems you must manually link the channel from the receiver to transmitter.

A wireless system with a Pedal Receiver is generally attached directly to your pedalboard as if it were a pedal. If you don’t have a pedalboard it can be put on top of your amp or really anywhere you decide is best. It’s most convenient use is on a pedalboard because the receiver is powered by a 9-volt power supply just like any other pedal is powered.

Some of the receivers, like the Shure GLXD 16, and Line 6 Relay G70 can act as a tuner as well. In my opinion, these wireless systems are the most convenient for musicians who gig often. The transmitters are usually charged by USB, or some take AA batteries. Will specify for each one below.

Rackmount receivers can either be rack-mounted or placed o top of an amp. Many Receivers that are considered Rackmounts have very little difference to a Table Top receiver in which you place it on top of an amplifier.

To Sum It Up

The rest is up to you on which type of wireless system you want. I typically recommend the wireless guitar system with the Pedal Receiver. It’s very convenient, and depending on the kind you get, it can be just as reliable of a high-grade rackmount receiver.

The wireless guitar system I personally use and always recommend for touring and live performance is the Shure GLXD 16. It has never let me down.