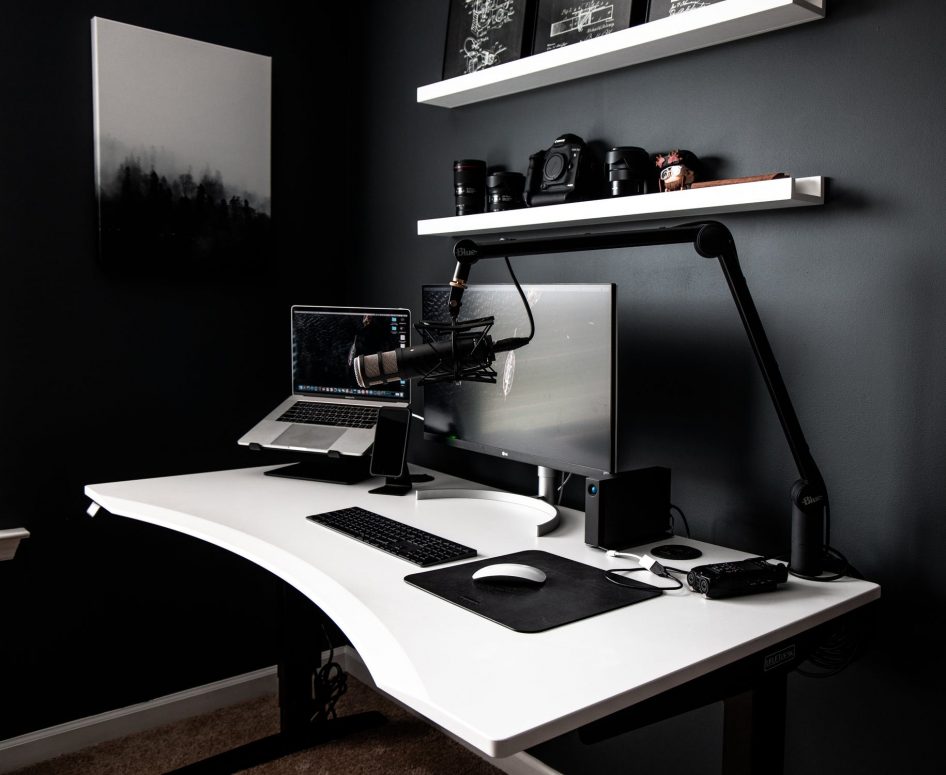 There are two types of desk mic stands with a boom arm; (1) Scissor arms which generally clamp on the side of the desk. (2) Weighted base compact microphone stands that sit directly on your desk.

Regardless of the type of desk stand you prefer, you’re budget, size preference, or style preference; you’ll certainly find what you’re looking for here. We formulated a list of the 11 best and highest rated desktop mic stands with a boom arm on the market!

In Short, Here Are The Highest-Rated Boom-Arm Microphone Stands For a Desk

First up, the Gator (GFWBCBM3000) is an excellent boom arm that effortlessly clasps to your desk. Coming with the purchase, it has a built-in XLR cable for added convenience. It’s well-received amongst users, as well. The articulating arm is spring-loaded and it’s able to rotate a full 360 degrees. Overall, it’s surely a reliable choice!

Users Say: “Honestly only complaint I have is it was very stiff when I first got it. After a couple of days of using it, it loosens up. 10/10 product.”

Running below $15, the InnoGear Heavy Duty is an absurdly stupendous bang for the buck. Considering its affordability for a desk attachable boom arm mic stand, most people are emphatically surprised by how much it supersedes the price range. This boom mic stand comes with a microphone pop filter and windscreen.

Amongst users, it’s certainly one of the most famous on the market. We highly recommend it for anyone searching for a boom mic stand for your desk without denting your bank account!

Users Say: “Ordered this for game streaming because I was tired of using my full-size boom stand. I was impressed with the quality for the price. Holds my tube mic easily. I did adjust the spring to the setting for heavier mics just in case. Came with the adapter for my shock mount which was nice. The pop filter is dual-layer which I may use for other applications. The only thing I wasn’t a huge fan of was the foam, I think it’s designed for a yeti mic, but since my mic isn’t as wide It looks ghetto lol.”

If you’re looking for a compact microphone stand with a boom arm for your desk, the Neewer is a dependable choice. It weighs approximately 4.4 pounds and roughly 15 x 6.9 x 3 inches in dimension. However, the durable metal base diameter is 6.3 inches. Providing easy adjustment, sturdy build quality, and impressive customer reviews; we highly recommend it. Be sure to check out the reviews below!

Users Say: “Its ad makes it look like two meters high, but it can only be used on the desktop, up to about half a meter. The disc is a solid metal that is very heavy for my students (mostly teenagers). Stability should not be questioned, and it’s not easy to be knocked down so that the microphone falls and makes an unpleasant sound after the collision.”

Also coming in at an affordable price, the Glife desk-attachable boom mic stand offers stellar value for the cost. It also comes with a shock mount, mic filter, and a mic clip. Another positive attribute is the sturdy construction for its meager price!

Users Say: “Overall pretty well made especially for the price, but where you mount to the desk the metal is a bit cheap. Still hold the yeti and other mics just fine. good product for the price.”

In case you require a phone holder above your microphone, the NOT HOME is your best bet. The adjustable boom mic stands conveniently attaches to a desk. The primary downside with this stand is it might be a bit timely to assemble. Aside from that, it’s perfect you also need to mount your phone!

Users Say: “This mic stand works just fine for microphone and cell phone at the same time, for the price that I paid I’m very satisfied with it. It doesn’t make much noise when moved, it seems to hold the mic in one place without drifting or slumping. It’s easy to assemble and set up and comes with everything you need to attach a mic. The build quality is acceptable, again for the price it is great.”

Here is yet another miniature microphone stand with a boom arm. Designed to comfortably sit on your desk, the Moukey MMS-5 only has a 5.5-inch diameter. You’ll also appreciate the vast height adjustments between 8.66 inches to 14.17 inches. It’s relatively popular with high reviews amongst users, as well. Possessing a metal construction, it’s robust and easily able to withstand accidents. Another beneficial quality is its overall ease of use!

Users Say: “Dictation of medical charts is great, but the constant picking up and putting down of the mic kills my efficiency. This mic stand has solved the problem. The clip where the mic inserts are not large enough to accommodate the Nuance Power Mic, but some hook & loop cord/cable ties hold it securely in place. This approach also allows me to put the mic back in my office after each shift when used on computers shared by others. Keyboard hot-key commands turn the mic on and off without ever having to remove my hands from the keyboard. The mic stand is well made and perfectly sized for this use. Great product. Arrived promptly. Securely packaged. Excellent price.”

Amazingly, the Pyle PMKSH04 is on a hefty price cut of 37% off the original amount. Although we’re unsure if this discount is permanent or temporary, we believe it’s, either way, an exceptional value. There are a plethora of reasons why we love this desktop boom mic stand.

It has a universal fit robust desk clamp, offers dependable arm extension and adjustments, and comes with a shock mount. You’ll also love its tough construction made of steel metal alloy. We highly recommend it!

Users Say: “Good steel construction. Even for a well-built elbow-stand like this, the challenge always becomes finding strong-enough support to crank it down to. The stand is well-balanced. However, the security of your mic depends heavily on how securely the steel clasp is fastened to its base. I used a sturdy, steel desk as the base for my stand and I was able to crank it securely enough to hold a nice studio mic with reasonable safety. I urge you not to use particle board or anything less than solid hardwood. Metal preferred.”

This desk microphone with a boom arm is another great option. But keep in mind, the InnoGear also used a kick drum pedal. However, it really doesn’t matter. It has high ratings amongst users, it’s relatively well-known, and offers a tough construction for added longevity. You might also appreciate the heavy base for enhanced stability!

Users Say: “This mic stand is absolutely solid. I have a heavy mic and it has no tilting issues – once you set the stand and even fully extend the arm, this stands at attention and lets you do your meetings, mic work, etc. with no unexpected surprises like tipping the mic down. Fully met expectations, and it was more solid than expected, too.”

The Gator Frameworks is a superb mic stand with a boom arm for your desktop. With effortless function, it’s easy to adjust the stand. You’ll also enjoy the rich feel. The base provides a decent amount of weight for stability, as well. This stand is wildly popular with remarkable ratings. It’s surely our highest-rated stand if you don’t want a clasp!

Users Say: “This is heavier than many cast iron floor stands. It also features a heavier counterweight than I have ever seen on any single mic boom. I ordered this on a whim to use in a hotel room while traveling to do some voiceovers. I will certainly be ordering more to use on stage back home. The boom extends a second time which was not apparent in the picture. It also comes with three cable management clips. Very impressed and pleased.”

Even though it’s not compatible with the Blue Yeti, the NEEWER NW-35 is an awesome choice for most microphone types. Let alone, it’s probably the most sought-after clasp mic stands with a boom arm on the market. Running below $15, it’s incredibly easy on your pocket. However, the build quality outperforms the price.

Many people also rave about its impressive longevity for the low price. The primary downside is the range of motion isn’t the best. It’s not very smooth when you try moving it compared to higher-quality clamp boom arms.

Users Say: “I got this to act as a microphone stand for my Dragon voice dictation power mic for medical documentation. With a small modification to the head that holds the microphone, it works absolutely perfectly. The articulation in the placement allows for excellent positioning and variability. Even with the modifications I had to make, I’m giving it 5/5, as opposed to 4/5, because what I’m using it for is not exactly what it is intended for, so why knock the score down?”

Last but not least, the Eastshining is an outstanding mic stand with a boom arm and desk clasp. One of its most unique qualities is it’s entirely made out of zinc alloy. In terms of longevity, build quality, and functionality; you’ll be overly pleased with it. Another beneficial characteristic is the range of motion is smoother than most in this price range. You’ll also enjoy the sleek alluring design!

Users Say: “I’ve been using this arm for live streaming and Youtube commentaries and it works very well. I can move the mic to where I need it and it will stay in place. I was able to add a Blue mic shield as well, just to help cut down on noise issues. The only negative for me was that the shock mount doesn’t work with my Blue Snowball mic. You can still attach the microphone, you just have to remove the shock mount first. Not too much to say here works well, and does what it needs to.”

In Short, Here Are The Best Desktop Mic Stand With A Boom Arm For The Money: Scissor Arms, Base Stands, Etc

If you’re interested in an affordable microphone for podcasts or voice-overs, see our top 9 here.

9 Best Cheap Microphones For Voiceover Or Podcast (Below $200)