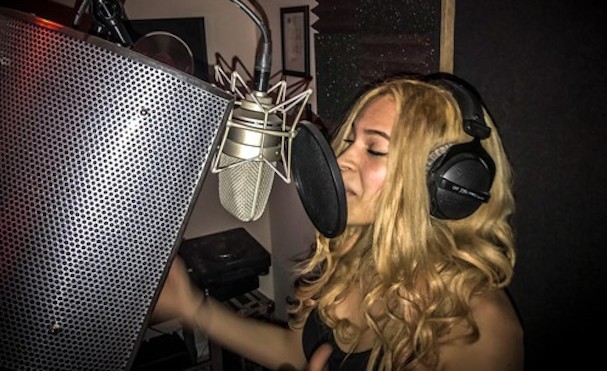 For many producers and engineers, it can be a decade journey of countless trial and error to find the perfect microphone for recording vocals at the best price. Many questions arise in the microphone searching journey but two, in particular, has stuck out for far too long; (1) which microphone is best for both male and female vocals, and (2) which of those microphones are the best bang for the buck.

While trying to sort through the conflicting information spammed throughout the internet, I decided to bypass the mess by going directly to a multi-platinum electronic music producer who is also the chief producer of my band’s record label, FORD. Having worked with Michael Jackson, Shinedown, Missy Elliot, Rob Thomas, Ludacris, Jewel, Ciara, Twista, Nappy Roots, The Sugarhill Gang, Eminem, and many more in the lineup, FORD has remarkable credibility in the field.

According to FORD with 19 Multi-platinum and 26 years of experience, the top microphone to record vocals for men and women alike at the best bang for the buck is the Neumann TLM 49. FORD has been a happy user with that mic for many years now and is not planning on switching it any time soon.

By the looks of it, the Neumann TLM 49 looks a lot like a vintage mic when in fact it’s not. The design is based on the M49 and M50 microphones of the 1950s but within the mic has the K47 element. The cardioid directional condenser microphone was also fused with some of the newer technologies by Neumann. One of the more modern technologies the mic was combined with is called “Transformerless Output” giving the mic optimal vocal reproduction and clarity.

The shock mount that comes with the Neumann TLM 49 looks incredible, which in turn adds to the professionalism of your studio. You can tell how well built and durable it is right off the bat once held in your hand. Speaking of looks and build, it’s important to note that the higher-quality gear your studio offers enables you to charge more per hour for studio time. Along with the professional look, the Neumann TLM 49’s durability and robust build quality ensure you will get the most out of your investment for years to come.

Specifically optimized for a vocal performance, one of the primary elements that make this microphone stand above the crowd is the linear frequency response with a presence boost of 3dB above 2kHz. This minor boost captures more air in the vocals giving the Neumann TLM 49 permission to bring out more presence in any voice type.

Not only being one of the lowest self-noise microphones on the planet, but the Neumann TLM 49 is able to withstand 114dB of sound pressure level without distorting. This fact makes it ideal for the loudest of vocalists across any genre of music. The cardioid pickup pattern is very tight but primarily in the higher frequencies, the mic shares supercardioid characteristics.

Features and Details of The Neumann TLM 49

Why Is the Neumann TLM 49 Best For Recording Men And Woman Vocals?

After using many studio microphones within 26 years, the multi-platinum music producer FORD said that there are only two microphones that are best for recording both male and female voices. The two microphones are the Neumann TLM 49 in which FORD uses right now that costs $1650 on Amazon, and the Sony C-800 going for $9990 (used to be more expensive).

FORD went on to say how some mics wouldn’t work as well for male voices and others for female voices, that’s except for the two mics mentioned above. To top off the interview, Ford said: “I think without spending $5000. It’s the best mic your going to get for that price range.”

A large amount of Neumann TLM 49 users outside of FORD claim the reasons why this mic is the perfect choice for men and woman is due to is accurately clear representation of the person in front of it.

The Tube Mic Sound In A Transformerless Condenser Mic

The Neumann TLM 49 is a solid-state microphone specially designed to give out the incredible sound most expect from power tubes at a more affordable price. The sound quality is very detailed, making even the softest voices sound bigger.

It uses Neumann’s state-of-the-art transformerless circuit technology that empowers the microphone to use high gain levels while maintaining low self-noise. It’s also known for capturing the “air” within the voice giving off a warmer and smooth tone for men and women while keeping perfect clarity due to its 3dB boost above 2K.

When looking at the frequency response curve, it becomes clear that the microphone was optimized for vocal use. It shows the presence peak at 5kHz gradually sloping downward till it reach 20Hz while everything below 1kHz registers below 0dB.

Most users of the Neumann TLM 49 claim it gives off a full, round, and precise vocal sound that holds out the breathiness low end. This is because the internal design emphasizes even harmonics resulting in a high-quality studio microphone that’s not only great for singers of either gender but voice-overs and talks as well.

The large-diaphragm capsule helps sustain a rich vocal tone. Considering the Neumann TLM 49’s high-quality performance, many users claim the mic sounds very good on its own. Even without using as many effects as they had to with previous mic’s. However, when they do add effects to the Neumann TLM 49, it highly optimizes the overall vocal sound even more so than with previous mic’s. In other words, the mic has high marks for handling the compressors, preamps, and all post-production effects added to the voice.

Although the Neumann TLM 49 is already one of the least noisy studio microphones on the planet, the included EA 3 shock mount helps further reduce even more unwanted noise. On a side note for those who end up with this mic, many claim it sounds best from 4-8 inches away due to the mic’s proximity effect. However, preference and opinion fall on you, the producer/engineer.

The combination of the cardioid condenser, large-diaphragm microphone tailored to sound like tube mic, a gentle upper-midrange boost, topped off with transformerless circuit technology makes the Neumann TLM 49 an absolute steal for the price.

Can You Use The Neumann TLM 49 to record instruments?

Answer: Yes, you can! Although the Neumann TLM 49 is specifically designed for vocals, many engineers tested it with many instrument types and have had great reviews depending on the instrument.

When recording the electric guitar with the Neumann TLM 49, the mic adds warmth to heavy distortion guitars without them sounding dull or muddy. This is because of the mic has a natural warmth to it by maintaining it’s accurate clarity due to its frequency response.

Unfortunately for drums, most claim Neumann TLM 49 is not the best choice for overhead, snare, and toms. Contrary to that belief, engineers have high marks for using it to mic the kick or using it as a room mic.

The Neumann TLM 49 has high marks for recording piano, cello, and a stand-up bass.

There are many polarizing opinions for the Neumann TLM 49 used for acoustic guitars. Some say they love it, some say otherwise. It’s best just to try it out yourself.

Neumann TLM 49, The Microphone Of Choice For Voice Over Actors?

What Is The Neumann TLM 49 Best Suited For

Here is a song my band recorded using the Neumann TLM 49 for vocals.

The Neumann TLM 49 is hands down a flawless bang for the buck professional studio microphone for recording men and women. As most of you know, studio vocals not only rely on the microphone itself but also the compression and preamp it’s running in to.

To learn more about FORD and some of the studio’s work, you can check out fordproductions.com. We are very appreciative that my band “Madame Vega” is apart of Monatomic Music and FORD allowing me to share the equipment they use and why they use it.

If you’re looking for the best value for the price mic, I highly recommend looking at our Best Bang For The Buck Professional Condenser Microphone!

11 Tips To Save Money For Traveling Musicians