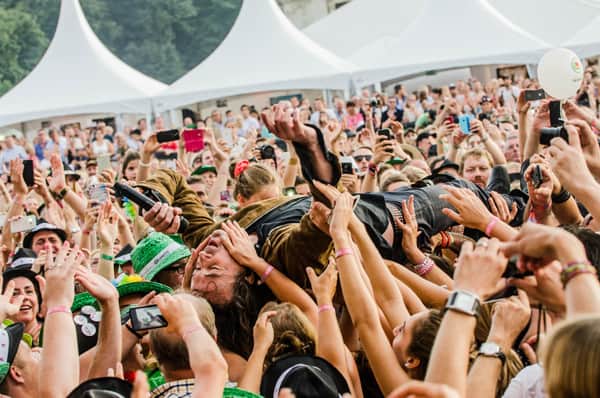 Which wireless microphone systems have the furthest range? We know what you want; you want to jump in the audience as you crowd surf throughout the entire Festival as you sing into your wireless mic. Alternatively, maybe that has absolutely nothing to do with the reason you want a long-range wireless microphone. For whichever reason that you do need one, we did the extensive research so that you don’t have to.

Although there is a large number of wireless microphones that give you 300 feet of range, believe it or not, the extra 30 feet does make a big difference. The wireless mic’s range is an import factor when trying to find a good system to fit your needs. However, multiple factors make up an excellent system to keep in mind as we dive into each one of them later on.

Here are the 6 longest range wireless microphone sets all tied at 330 feet With the exception of the Sennheiser SKM 6000 at 400 feet.

The SKM 100 G4-S is a handheld wireless mic where the transmitter is built into the microphone. Ran as an analog system, the microphone includes a simple mute switch so that no unwanted noise gets picked up when not in use. The e835 capsule puts forward a smooth sound with built-in feedback rejection.

Despite looking similar to the younger version EW 100, the Sennheiser EW 300 G4-865-S has more features and upgrades. This products mic is made of a durable metal housing, able to withstand dynamic touring conditions.

Compatible with 32 frequencies rather than 12, the EW 300 has an e865 capsule for better vocal punch, extended dynamic response, and more of a pronounced presence. It used to be priced at $1,250 now running for $999.

It’s unclear to me that the latest version of the Sennheiser EW series with even more features and upgrades is $100 cheaper than its earlier EW 300. The Sennheiser ew 500 comes with a dynamic mic rather than a condenser microphone. While having the highest of the 3 Sennheiser’s, e935 capsule offers a smooth, natural sound with a fast transient response. Along with that, the e935 capsule employs a tight supercardioid pickup pattern for superior feedback and off-axis rejection.

Its auto-frequency scan feature makes this system easy to use, for any changes on the rackmount, just press sync. The microphone weighs about 1/3 of its earlier versions, believe me; this makes a big difference on a 2-hour gig/speech.

Shure QLXD24/SM58 Digital wireless mic will give you an uninterrupted clear signal for a worry-free performance with its 24-bit digital audio and remarkably efficient RF spectrum. Very easy to use, with the push of a button the receiver finds open frequencies.

The SM58 is the most popular mic in the world. Its tailored vocal response for sound is a world standard for singing or speech. This system offers over 120dB dynamic range, secure transmission with AES 256-bit encryption, stable RF connection with digital predictive switching diversity, along with the QLXD4 receiver. Abnormally low latency for a digital system at 2.9 ms.

The microphone comes with a lithium-ion rechargeable battery located in the transmitter, plug the USB into the transmitter to charge it. Rechargeable batteries eliminate consistent battery purchases for higher year-end profit/convenience. Power button located at the bottom of the mic, this reduces accidental shutoffs while performing. It has low latency for digital at 4 ms.

Where anything less than stellar is not an option, the Sennheiser SKM 6000 has been used at super bowl performances to some of the biggest festivals around the world with top artists. This is the most expensive but best wireless mic on this list.

The compatible receiver is the Sennheiser EM 6000

The other microphone of professionalism as this one by Sennheiser is their SKM 9000 with minor differences.

Other Wireless Microphone Systems To Consider

Range is an essential factor when determining a wireless microphone, but it is no more important than signal reliability, durability,  vocal tonality, latency, and dynamic range. If your planning on purchasing a quality mic that will last, its best to wait until you have the money to spend rather than buying a mic in a hurry just to be unsatisfied in the long run. Do your research, check the reviews, and may your crowd surfing journey begin! If you’re interested in a digital wireless microphone system, see our top 5 picks here.