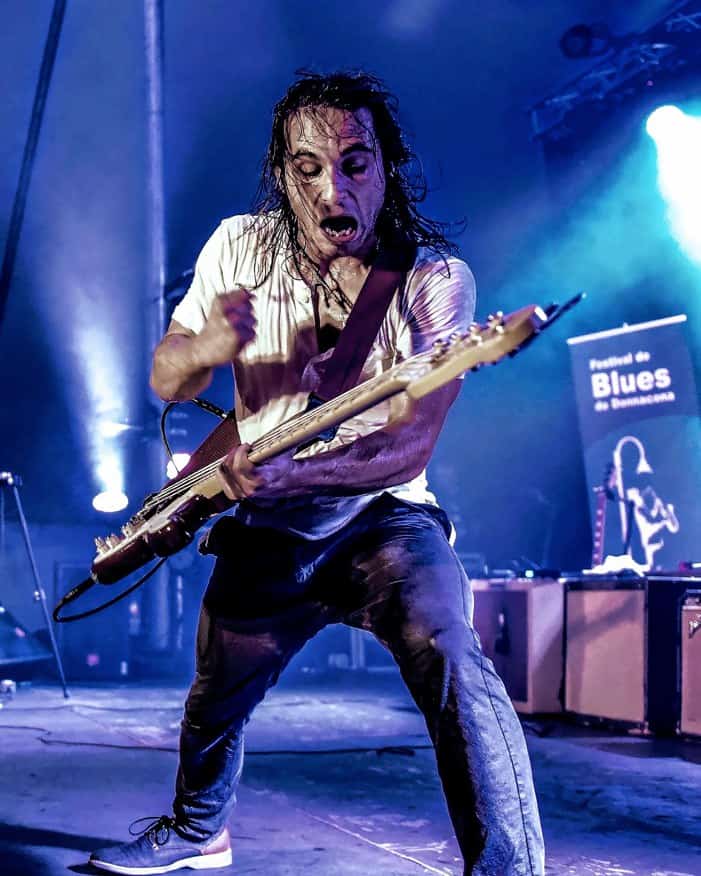 It has now been proven by research that live visual performance is unconsciously more import to the audience than the musical audio performance.

In a way, it’s proven by research; Stage performance is vital to gaining new fans.

Visual Over Audio: For Live Performance

This study is not in any way shape or form saying that you can do nonstop backflips on stage, miss 70% of your notes, then expect to get more fans. The study isn’t saying that if your music is “3 of 10” stars and your band’s stage presence is a “10 of 10” means your going to gain fans. I am only stating that stage presence plays a much more significant factor in gaining fans than what we musicians thought.

According to The Academy of Sciences of the United States of America’s study, musicians are not only the first to emphatically deny that visual is more important to the crowd than the music but also do not unconsciously judge a live performance based on visual over audio when the non-musicians do. Simply put, when a musician watches a live show they don’t view visuals as necessary as the music, non-musicians are Vice Versa. Nashville stage coaches typically claim, the visual performance makes up 55% of the show where audio 45%.

Psychology Behind The Importance Of Stage Performance

Synaesthesia? A neurological trait or condition that results in a joining or merging of senses that aren’t commonly connected. The stimulation of one sense causes an involuntary reaction in one or more of the other senses. For example, someone with synaesthesia may hear color or see sound.

While music itself is specifically organized from sound, its intrinsic meaning is genuine human feeling.

To enjoy music one must understand, appreciate and share the feelings expressed in it. This, however, is equivalent to understanding, appreciating and sharing the feelings of its performer, since it is he who expresses his own feelings in the music he performs

What music has became to most of us musicians is more of the theory behind the songs, harmonies, guitar licks, bass and drum pocket, how many notes we can fit in a second, time signature, etc.
But in its core, I think many of us, including me for a while, forgot what music truly is. Music is what feelings sound like.

Music Is An Art Of Sound

Not all, but many experts agree that we all have a bit of synaesthesia to a degree. Both elements of audio and visual of a live performance are of great aesthetic value.

For those who resonate with a high-energy band whether it being blues/rock/reggae/alternative/metal etc., then they are resonating with the auditory element of the music. However, if the band’s performance lacks high energy visually, then there will be a significant lack of aesthetic value and thus will undermine synaesthesia. I firmly believe that high energy audio is strongly complemented by high energy visual.

Music is an art of sound

The two elements—the auditory and the visual—fuse into a synaesthetic unity for the listener. By this I mean that kind of unity of sensation in which the experience of one sense-impression conjures up that of another

For guitarist’s and bassist’s that want to advance there music career, it is important to invest in a quality wireless guitar system.
Believe me, though; I have been there. I could’ve won a Grammy for
“Excuse Maker Of The Year To Not Get A Wireless Guitar System”
We will dive into my past limiting beliefs and general myths about wireless guitar systems a bit later.

If you have never performed live with a wireless guitar system, than your a dog that has never experienced the freedom and true potential without his leash.

It’s true; I never knew how much more of a difference it made until I finally grew some balls, got out of my old paradigm and purchased my 1st wireless guitar system. People never really think about this, but when your subconscious mind knows your attached to a leash (cable), it alters your ability to perform. However, I never realized that until I went wireless for the very first time.

2. The consistent thought of “Am I going to trip on my cable and unplug it from my amp?” was gone.

3. Able to add spin moves:
The video shows what I mean at roughly 15 seconds in.

4. Increases overall visual of the stage: Spaghetti all over the floor looks tacky. Even If you’re playing a festival where its set up with cables across the floor for other reasons behind the scenes, going wireless makes a big difference.

5. Able to do “Behind The Back Solos” significantly easier with more congruence.

6. Able to go out in the crowd and perform solos:
The truth is, the majority of us musicians think this is lame. We must realize that non-musicians/potential fans look at a live performance way different than us. They, for the most part, love it when a musician steps in the crowd for the solo and typically don’t forget it.

My Past Limiting Beliefs Of Getting A Wireless.

To be honest, I had a long and miserable journey in my first few years of going wireless. Many of these myths and limiting beliefs were half-truths. But it was the fact that I was unwilling to purchase a system above $300.

It took me five wireless units to find my perfect fit, and it was because I decided to invest in a quality wireless unit, the Shure GLXD-16. Believe it or not, I also had a problem with my wireless units breaking from water damage (My Sweat). I fixed this issue by purchasing the Neotech Wireless Pouch, which was an incredible 15 dollar investment.

You might be asking why did I insist on staying wireless if I had such a difficult time at first with my lower quality systems? The truth is, you will never go back to a cable once you finally feel what it’s like to perform without one.

Busting Each Limited Belief/Myth with A Quality Wireless System

With a quality wireless guitar system, every single limited beliefs/half-truth, I used to have dissipated entirely.

Wireless Guitar Systems That Will Not Fail You

Table Top (set up the receiver on top of an amp)

Shure GLXD 14– Unlike GLXD-16 This system gives you the option to charge your transmitter battery directly into the charging port on the receiver.

Shure GLXD 14R– This system is rack-mountable, meaning you can attach this system to your rackmount if you typically use one on top of your amp for other purposes. Like the Shure GLXD 14, you can also charge your battery into the charging port of the receiver if you prefer that over USB charge.

The difference between this list and the last list is, these wireless systems need disposable batteries. Unfortunately, the only other systems that are rechargeable typically fall in the beginner realm that I do not recommend for serious musicians.

Why Many Big Name Brands Are Not On Our Lists

You may be thinking we are sponsored by Shure, we are not. If that changes, I will come back to edit this.

Although multiple musicians rave about the Line 6 series, the truth for me is the line 6 units I have been an owner of in the past (G10, G30, G50) were terrific in many ways, Yet, I have not had the perfect luck with any of them in terms of signal reliability. Although they may have been rare, (some more than others), dropouts sometimes occur due to signal interference while performing live.

I have heard many stories of musicians that used Line 6 and never had a single dropout, but since that was not the case for me, I was not going to recommend a wireless instrument system that dropped out with me.

The Xvive Audio U2 may be an excellent wireless system for the price of $154, but it is not up to par compared to pro-grade wireless equipment. In terms of Reliability, Signal Strength, Tonality, Range, and Durability, wireless systems below $300 are not recommended for serious musicians. There are multiple reasons behind this, but we will save that for another article. For serious musicians of any sort that are looking to make a one-time investment for a wireless that will keep you satisfied for years, the Xvive Audio U2 is not recommended.

Why I Typically Recommend Digital Rather Than Analog-

Although there may be some good analog wireless systems in the market, I am very biased leaning towards only digital use for wireless guitar systems considering many factors.

Analog systems need to compress the dynamic range of the audio before being carried on a radio wave, which in turn hurts/colors your tone, and even worse for bassists. The analog systems that don’t hurt the sound of your instrument tend to be much more expensive.

If you travel to certain countries with your analog system you need a “Roaming Licence” that you will need to pay annually.

The signal being a radio wave can be profoundly affected by other radio waves causing a buzz or hum.

Why I Use And Strongly Recommend The Shure GLXD-16

The Shure GLXD-16 is, in my opinion, the best wireless choice to go for all mid/high-level musicians. Adding the Neotech Wireless Pouch to your strap makes the perfect combo. The List below is about my personal experience with the Shure GLXD-16.

This website is written by musicians, not salesmen. However, please don’t believe every article you read online, check the reviews yourself for the Shure GLXD 16 here.